Rock and a hard place

Tony Parsons was an angry young gunslinger at ‘NME’, then had huge success with his novel ‘Man and Boy’. Now he’s a crime writer – and has just voted for Ukip. Why? 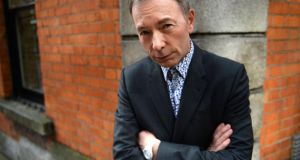 Tony Parsons says that he no longer worries about his “fading former glory”. Was his glory really fading? It was, he says. After huge success in 1999 with Man and Boy, a novel about single fatherhood, his relationship-oriented “men’s lit” novels – his term – were no longer selling well. He’d left his publisher, and shortly afterwards the Daily Mirror let him go as a star columnist. In 2010 a conversation with his friend Sam Mendes, the director, about James Bond inspired him to write a serious crime thriller with “a serious hero”, but in order to do so he had to cash in his pension.

“One of the reasons I’ve done well in my career is that I’ve known when it was over, known when to move on and reboot,” he says. “It’s a long time since Man and Boy. It’s really easy to get complacent, to say ‘I won Book of the Year. I sold millions,’ and to forget that it wasn’t yesterday.”

The Murder Bag is a grim and gritty crime story, the first of a trilogy, but it shows some continuity with his previous work. The niftily named Max Wolfe is the kind of tough-guy cop who can disable an attacker with one punch, but he’s also a single father whose tender parenting wouldn’t be out of place in Man and Boy. (Manhunter and Boy?) “One reviewer said, ‘I never saw a detective doing the school run before,’ ” says Parsons.

A lot of his work attempts to negotiate the thorny subject of contemporary masculinity and is informed by his traditional working-class upbringing. “My dad wanted me to be tougher than I was and bought me this heavy little punchbag where you stood on the plank and punched it, and it swung back and hit you in the face.

“I didn’t like that much. I much preferred my mum reading me stories. I was an only child, and they’d tried for 10 years to have me. So my dad wanted me to be Henry Cooper and my mum just wanted to sit me on her lap and read me Rupert the Bear stories. I fell in love with that.”

Parsons, who still boxes, knew he wanted to write, but there were few routes to authorship for an Essex boy without connections.

“I loved Keith Waterhouse, who was from a working-class background and wrote newspaper columns, wrote Billy Liar, wrote great novels. When I was about 16 I wrote to everyone I could think of, asking what to do if I wanted to write. He’s the only one that wrote back: ‘Dear Tony, Get an agent. Best wishes, Keith’.” He laughs.

Parsons left school at 16 to work at a gin distillery, but he spent his spare time writing a novel. It didn’t sell well, but when New Musical Express advertised for “hip young gunslingers” the novel helped him to get a job at the music newspaper. “There were only two people at the paper who hadn’t gone to university.”

He met his first wife, Julie Burchill, there, and the duo became icons for teenage punks, with tales of them cordoning off parts of the NME offices with barbed wire and broken glass. (“We were completely out of control,” he says.)

He loved it. “Thin Lizzy were the first band I went on the road with,” he says. (He has just seen the statue of Phil Lynott, the Thin Lizzy front man, on Harry Street in Dublin.) “Phil was like a beautiful big brother to me. I remember sitting in a Holiday Inn in Leicester for breakfast, and he was saying, ‘You interview me now. We’re on the road, but it’s tough on the road. So we’re going to have vodka, but we’ll have orange juice in it. It’s full of vitamin C.’ ”

He recalls taking drugs with Debbie Harry, of Blondie, and seeing Iggy Pop commandeer a Copenhagen jazz club. “Rock stars were acting as you’d expected rock stars to act. But it was ending. People I was close to died, like Johnny Thunders [of New York Dolls and The Heartbreakers] and Phil. The drugs weren’t fun any more. My saving grace was that I liked speed, amphetamine sulphate, and I was never into heroin.”

The 1980s were hard on him. “I was 29 and had come out of this playpen where I was flying around with Thin Lizzy. I had a tough old 1980s. Scraping by. But you just have to bite down on your gumshield.”

Piers Morgan eventually gave him the Daily Mirror column, and from 1994, alongside Tom Paulin and Allison Pearson, Parsons became a regular on Mark Lawson’s Late Review, a weekly strand on The Late Show and, later, Newsnight.

Then came Man and Boy. Mendes wanted to make a film of it. “But I think I scared him off,” says Parsons, chuckling. (Apparently, he insisted that he be the one to write the script.)

His politics have veered rightwards over the years. Parson’s a right-wing libertarian, according to his friend Lawson, and he clearly prides himself on being outside the media consensus. This has led to sporadic controversies, “but I can think of just one thing I’m ashamed of,” he says, “and that’s when I made a joke about Fred and Rose West and someone wrote a very restrained letter saying, ‘Those are real girls’. . .

“I did an interview with the Guardian where she was saying, ‘When you said Simon Le Bon had a fat bum in 1984, you must regret that.’ And you think, I don’t want to hurt Simon Le Bon! But the truth is, I’m not thinking about it until she brings it up.”

He told the same interviewer that he supports Ukip. He laughs. “That went down really well. Look, I’ve always been against the federal Europe. I was involved with Bob Geldof 12 years ago in the campaign to keep the pound.”

“It really worries me that the British Labour Party think people are too stupid to vote in a referendum and that the media want to distract me and my country from these fundamental issues.”

He talks at length about this. Sometimes it seems as if he’s supporting Ukip because he’s not meant to – “What I really resent is the fact you’re not allowed to discuss this stuff,” he says – and sometimes he seems to question his own position.

“I quite like a London full of foreigners. I live in a mixed-race family. My wife’s Japanese. If you pushed her to say what religion she is, she’d say Buddhist. Two languages are spoken in my house. I dropped my wallet the other day, and a young builder called out to me. He was from Romania, and it felt like a sign from God, saying, ‘Be careful what you say.’ ” About what? “About the EU. About Ukip. What you say about foreigners and immigration.”

I’m left confused by his views. “There’s no contradiction,” he says.

The more immediate challenge Parsons faces is to his authority as a crime writer. He recently angered thriller fans by suggesting that the genre lacked an emotional core. “[I said that] I wanted to write a thriller ‘with heart’, that the books I wrote lacked a page-turning quality but had emotional weight, while thrillers often excite but don’t move you. People on Twitter were annoyed. Typing ‘STUPID’ in capital letters.

“Look, this is just my opinion. And I’m not trying to insult anybody. I’m actually talking about books I really love,” he says. “But you could endlessly get dragged into fights. My old kung-fu teacher used to say, ‘Walk away.’ It’s a good rule on Twitter.”

Well, The Murder Bag is a thriller with heart. (Whether or not that’s a rarity I’ll leave up to you.) As a killer stalks the super-rich of London, Max Wolfe struggles as a single father, and the book manages to be both gripping and moving. What’s more, the juxtaposition of domesticity and gruff masculinity allows for some touching macho wish fulfilment. As when Max defends the honour of a cavalier spaniel called Stan by punching a mocking goon in the chest.

This incident says a lot about the blend of toughness and sensitivity that makes up “Parsonsman” – my term – and, like much he writes, it has a basis in fact. “I have a dog called Stan,” he says. He laughs. “If anything would make me respond with violence, insulting my dog would probably do it.”

The Murder Bag is published by Century