A €10 million Claude Monet painting, which was damaged in 2012 when a man allegedly put his hand through it, is back on display at the National Gallery in Dublin after 18 months of extensive conservation work. 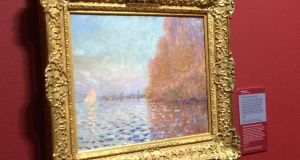 Argenteuil Basin with a Single Sailboat hanging once again in the National Gallery after being unveiled this morning.

A Claude Monet painting, which was damaged when a man allegedly put his hand through it has gone back on display in the National Gallery after extensive repair work.

Argenteuil Basin with a Single Sailboat was unveiled today after 18 months in the gallery’s restoration department.

A man is currently before the courts charged with criminally damaging the work in June 2012.

The painting, which is the only one from the French impressionist in the National Gallery, dates from 1874 and is valued at €10 million.

The damage involved an extensive three branch tear. Fragments of paint and priming layers had also been lost from the surrounding site of the damage.

“This project to restore and conserve one of the gallery’s most popular Impressionist works of art is testament to the outstanding expertise and dedication of our professional team of conservators,” he said.

The project was undertaken with support from French bank BNP Paribas and cost a “five figure” sum, Mr Rainbird added.

He went on to say that although the incident in which the painting had been damaged was “traumatic” the gallery does have good security systems in place. Mr Rainbird said there is an inherent contradiction in putting priceless items on public display.

“You could say lock ‘em all up but that’s not what we’re here for,” he said.

The painting, which is now behind a protective sheet of glass, is once again hanging in its old spot in the gallery’s Millenium Wing. The repair work is subtly visible, which, the conservationists say, is in keeping with current ethics around the restoration of museum pieces.

Argenteuil Basin with a Single Sailboat was bequeathed to the Gallery by the Irish dramatist and politician Edward Martyn (1859- 1923).

Martyn is thought to have acquired the painting on the advice of his cousin, the writer George Moore (1852-1933), who had lived in Paris and was well acquainted with Impressionist artists.