Remake ‘The Last Jedi’? You’d really have to be a nutter

Do not judge 'Star Wars' fans by this stupid campaign. Not all of them have lost the plot 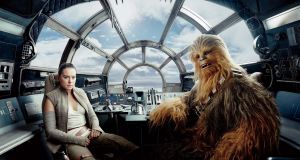 'Rey, I’m not your daddy.' Fans were annoyed that the character played by Daisy Ridley was not the daughter of Luke Skywalker or a Wookiee or something

Let’s be Gerry Adams. Those nutcases who aren’t really remaking The Last Jedi haven’t gone away, you know. Last week a characteristically incoherent press release confirmed that they would continue to eat erasers, jam pencils up their noses and otherwise behave like resentful eight-year-olds in the second period of double maths.

“Disney is the only one that has taken us at RemakeTheLastJedi seriously in this whole endeavour,” the statement read. “They’ve listened to us and taken our advice such as: bringing back George Lucas, retconning the [sic] The Last Jedi comic, using footage of Carrie Fisher. ” The paragraph goes on to mention a bunch of other developments that had nothing to do with their stupid campaign.

Obviously, none of this matters. Stick your heads out the window and, even if all you see is a seagull eating bits of kebab, you will have encountered something of greater import than the RTLJ fiasco. The campaign does, however, offer depressing pointers to how the image of pop-culture fandom has been debased over the current century. This is now what many people think of when they think of science fiction aficionados. They are all male. Their emotional development ceased minutes after the arrival of pubic hair. They resent any attempt to recalibrate cultural patriarchy. And so on.

Most of the criticism, however, reflected a suspicion in nutter circles that the new 'Star Wars' films were just a little too 'progressive'

None of this is close to the truth. It’s a little like the caricature of football fans, popular with Tory politicians in the 1980s, as a lumpen mass of violent hooligans. The noisiest, least tolerant and most aggressive get to define fandom for the whole diverse clutter.

It took a while for objections to the eighth film in the official Star Wars saga to set in. Rian Johnson’s picture was initially well received by the mainstream critics. Box-office returns were disappointing in China, but they were so spectacular in the United States that it hardly mattered. Every single person in Ireland (that phrase again is “every single person”) rejoiced in Skellig Michael’s performance as Star Wars Island. Then a low murmuring from the nerd-herd seeped across the body cultural.

You may have to prop your eyelids open with matches for a paragraph or so, but we need some explanation of the objections. The nuts are unhappy that Rey’s parents turned out be of no galactic consequence. The character played by Daisy Ridley was hoped to be the daughter of Luke Skywalker or Darth Maul or a Wookiee or something. She wasn’t. Luke Skywalker didn’t die in spectacular enough fashion. There are too many jokes. Princess Leia flies. All that sort of stuff.

Most of the criticism, however, reflected a suspicion in nutter circles that the new Star Wars films were just a little too “progressive”. Ridley’s Rey, the closest thing the current sequence has to a protagonist, is not just (sinister John Williams chord!) a woman; she is, arguably, a version of that idealised female character known colloquially as a “Mary Sue”. One of the parallel plotlines is driven by friendship between characters played by John Boyega, a black actor from Peckham, and Kelly Mae Tran, an Asian-American who was recently forced to cancel her Instagram account after receiving torrents of racist abuse. “You have used your new characters as toys and tools to push an agenda of masculine inferiority,” a much-circulated online screed bellowed. Luke Skywalker died like a sissy, you see.

Eventually, the fight-back kicked up the absurdity that is “Remake The Last Jedi”. The organisers are asking Disney, owners of the Star Wars brand, to wipe The Last Jedi from the canon and permit these nonentities to remake it in accordance with the Screw-loose Contingent’s wishes. No Social Justice Warriors. No wimpy deaths. No jokes. “It is not a small minority of racist and misogynistic fans that were disappointed with The Last Jedi, but a majority of fans who have settled in disinterest,” the website declared (thus managing to misuse the much-misused word “disinterest” in a way it has never been misused before).

Access the site and you will discover that some $412 million has been pledged to the cause. That is significantly greater than the budget for any film ever made. Unfortunately, all you need to pledge is a working computer and an imaginary email account. You could for example promise a few hundred from the account fruitcake@asshat.com. It’s just an idea.

Meanwhile, the vast majority of Star Wars fans conduct themselves with the same mixture of everyday frailty and commonplace nobility you expect from butterfly collectors, rowing enthusiasts, turtle fanciers, plane spotters and amateur equestrians. It’s not fair. Imagine if your entire family was judged by the behaviour of your drunk Uncle Frank that time he tried to go the lavatory in the broom cupboard.

The fans are okay. Trust me.