Record shops: vinyl countdown or the start of a new groove?

Ahead of Record Store Day on Saturday, one Dublin shop is preparing to close and another is opening in Belfast. What does the future hold for bricks-and-mortar outlets? 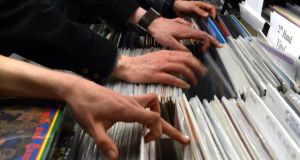 Tower Records in Dublin, which remains the only bricks-and-mortar flag bearer for that once ubiquitous chain outside of Mexico. Photograph: Cyril Byrne

The future of the record shop may well be a ping-pong table. You’ll find one upstairs in the Rough Trade store in Brooklyn in what used to be a film prop warehouse. It’s there among a grid of repurposed 40ft shipping containers, one of which has been turned into an interactive lounge for the Guardian newspaper; another is used for a pop-up art installation. There’s also a cafe, a bookshop and a photo booth.

The shop itself is huge as record shops go – about 15,000sq ft – but as you flick through the racks, it’snoticeable how limited the stock is. While there’s a width to what’s on display – everything from high-profile new electronic and indie releases to the latest Numero retrospective, from a Nigerian highlife reissue to the latest hip jazz album – the depth is lacking.

The curated nature of the space dictates that the stock is targeted at a specific audience, who can always go online to get the back catalogue. Most of the floor is now commandeered by other attractions to get people through the door in the first place.

Of course, you can always go elsewhere for deep stock. There are still shops such as Euclid in New Orleans or Amoeba in Los Angeles that take pride in cluttering the aisles to the ceiling with dusty grooves. And while the quantity of shops in London’s Soho or around Hanbury Street has dwindled, you will still find an occasional store in those environs that could pass for High Fidelity’s Championship Vinyl.

Worldwide, many powerhouse brands are no longer in business – Tower in Dublin remains the only bricks-and-mortar flag bearer for that once ubiquitous chain outside of Mexico. Meanwhile, the smaller independent shops that were a regular feature of towns and cities even a decade ago are now very much an endangered species.

Record shops are now niche concerns – carefully curated affairs that often spread the financial risk by sharing rent and floor space with a cafe, clothes shop or art gallery. The key words you will hear around music retail spaces are now “community”, “social” and “interaction”. Rough Trade co-owner Stephen Godfroy describes his store as “somewhere we want people to spend time. It’s a community hub and meeting place, not just a hobby shop for music nerds.” Some may feel there’s a slight undertone there that those who actually care passionately about music are unwanted in these new spaces.

Of course, there are still shops that realise there are music fans who have money to spend. It was striking that one of the first instores at the relocated Tower premises on Dublin’s Dawson Street was an outside broadcast by Lyric FM’s Classic Drive show. Classical-music fans, it would appear, are still into physical formats.


Record Store Day
Then there is Record Store Day, a worldwide annual event that began in 2007 to highlight independent music retailers worldwide. This year’s Record Store Day is on Saturday, and special vinyl, CD releases and promotional gadgets will be available exclusively on the day, while hundreds of artists will perform at shops worldwide.

But just as a puppy is not only for Christmas, record shops are also open all year round. In recent years, the event has become as much about eBay sellers, collectors and major labels jumping into the ring as the indie stores bigging themselves up.

For one local shop, this year’s Record Store Day will be bitter-sweet. Gib Cassidy will ring up the till at Elastic Witch in Dublin for the last time next Saturday evening. While his decision to close the shop after 2½ years stems from a wish to spend more time on other pursuits (he is the drummer with Girls Names), Cassidy has some interesting observations about the new record-shop model as he heads for the door.

Elastic Witch is based in the Twisted Pepper venue on Middle Abbey Street, and it shares space with a cafe and barbershop, a decision that Cassidy feels brought in more business. “It cuts both ways. People might come into the cafe and then have a dander in the back room and buy some records. Or they might come to buy records and then get a coffee on the way out. It definitely brings in more people.”

Release schedules
While he describes footfall as “pretty constant, given that I’m in the back of a music venue on what is not the most famous shopping street in Dublin”, he did note a weaker start to this year due to release schedules. “The type of stuff I sell tends to be new releases, and I don’t think the releases were as good or strong as, say, last year.”

Cassidy feels the future of music retail will revolve around curation. “What a shop like Amoeba has in its favour is population, and we’re a small country and city. An ideal situation is a carefully curated shop that has a bit of personality. People coming in knew my buzz and they knew what I’d have in stock.”

As one shop closes, another opens. Five weeks ago, Kenny Murdock opened Sick Records in the centre of Belfast. That city was once full of flourishing independent record stores, from Good Vibrations in its heyday to the likes of Heroes & Villains and Dr Robert more recently, yet the sector largely vanished from the streets.

It was something that puzzled long-time record collector Murdock. “I’ve always been looking at Manchester and Glasgow and wondering how they could sustain three or four shops and Belfast couldn’t even have one. If the timing and rents and rates and location were right, I’d always said I’d have a go, so here we are.”

Since opening, Murdock says the shop has been very busy, as people pop in and reacquaint themselves with the art of browsing. “I’d have looked at shops like Sister Ray and Monorail and Piccadilly as examples. They reflect my taste, and I hope the shop reflects my taste. I won’t bring in records I don’t rate, even though I know they might sell. I didn’t bring in the Elbow or Jimi Goodwin albums, for example.”

That said, Murdock points to the large quantity of metal records in the shop as a sign that he’s also willing to let staff members dictate some stock choices. “I know nothing about metal but Darren here does and Belfast’s metal fans buy records.”