Poets and fans gather for WB Yeats celebrations in Sligo 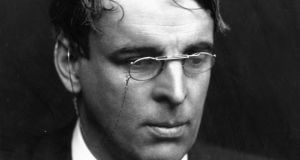 During one of the headline events of his birthday celebration in Sligo, WB Yeats’ granddaughter Caitriona briefly shared a stage with Mary Plunkett grandniece of 1916 leader, Joseph Mary.

Caitriona Yeats, a harpist, was presented with a book of her grandfather’s poems hand-printed by Plunkett, whose work is inspired by the poet’s sisters Susan and Elizabeth Yeats, of Cuala Press fame.

Earlier in the day, Ireland’s ambassador to Britain Dan Mulhall had noted that Yeats “engaged on a daily basis with the public life of Ireland”.

The encounter between descendants of the revolutionary and the poet underlined that role in the life of the country.

Yeats and Plunkett were applauded by six poet laureates , all female, from Ireland, England, Scotland, Wales, London and Northern Ireland, who were joined by President Michael D Higgins at Saturday night’s National Poets’ event. The laureates read from Yeats’ and their own work.

President Higgins, despite being enthusiastically kissed on his arrival by the National Poet of Scotland Liz Lochead, who was charmed with the idea of a poet as President, chose to read Auden’s In Memory Of WB Yeats, but none of his own work.

Politicians and celebrity guests spent the weekend in Sligo soaking up the atmosphere.

Minister for Arts Heather Humphreys was at Lissadell House, while Minister for Communications Alex White was there for the cutting of a giant birthday cake on O’Connell Street.

It was a weekend when everyone reached for connections with the man, who President Higgins described as our national poet.

London laureate Aisling Fahey , wasn’t sure if it was her grandfather or great grandfather who “used to drive Yeats in a horse and cart to Thoor Ballylee” when he went west.

One of the unlikely stars of the weekend was Absolutely Fabulous star Joanna Lumley who declared that Sligo had stolen her heart.

“I love it, I completely love it,” the actor said.

Her popularity meant that the award winning Lake Isle of Innisfree garden was in danger of being trampled into the ground when she cut the ribbon there.

Lumley, who started the day with a visit to Yeats’ grave in Drumcliffe, had been invited by Senator Susan O’Keeffe, chair of Yeats 2015, to open the garden at the Model arts centre because of her campaign for a London Garden Bridge.

“It is enchanting – Yeats’ dream, every dream he ever had,” she said.

If the actor was taken aback by “all the loveliness I have met” in Sligo, out the road in Lissadell House, Senator David Norris was giving her a run for her money in the popularity stakes where he too spent the day posing with fans for selfies.

The apparently age-defying 69-year-old Lumley who urged people to “take off your hats and dance in the street” recited When You Are Old.

In Lissadell, Senator Norris gave a majestic rendering of Sailing to Byzantium while Anne Doyle read The Cat and the Moon tearfully recounting that her pet cat Pooka had passed on last week.

RTE’s Bryan Dobson chose Easter 1916 as his party piece, while his colleague Mary Wilson treated the audience to her favourite Crazy Jane talks with the Bishop.

But in Hargadon’s pub Caitriona Yeats probably won the heart of many of those force fed Yeats as school children when she candidly admitted: “We didn’t read much of my grandfather’s work growing up”.

She read Come Gather Round Me, Parnellites because her mother Grainne used to sing it and she liked the sentiment of “Come fill up all those glasses and pass the bottle round”.