Peter Crawley’s 2015: Gender and history get a stunning makeover

From DruidShakespeare to Waking the Feminists, 2015 was all about changing perspectives 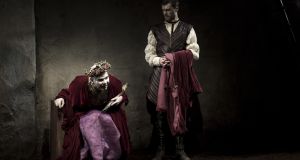 Looking back on theatre in 2015 has been a reminder that there are always new ways of seeing things, and that theatre demands fresh perspectives and different views.

That’s a reassuring point for an art form so dependent on revivals: a new staging of The Walworth Farce, for instance, from Landmark, put most of the Gleeson family right at home in Enda Walsh’s surreal drama; the Gate’s production of Harold Pinter’s The Caretaker might have featured the performance of the year, from Marty Rea, if he didn’t get such fierce competition – from Marty Rea in DruidShakespeare; or a production of A Midsummer Night’s Dream at the Abbey that restored a sense of adventure to the building.

Other ambitions to discover different perspectives within familiar material might have seemed more radical, such as Druid’s intent, with Mark O’Rowe, to transplant Shakespeare’s history plays to Ireland. But the magnificent reality of Garry Hynes’s daring project was to claim the right to these tales, and prove that they belonged to every voice, and every body.

In its gender-blind casting, in which Rea played an epicene Richard II, succeeded by Derbhle Crotty’s slowly disintegrating Henry IV and Aisling O’Sullivan’s ascending Henry V, Druid found itself at the forefront of a meditation on performing gender, on stage and in society, that echoed the nation’s march towards broader recognition and equality.

In Fishamble’s Underneath Pat Kinevane played a woman character in a performance both otherworldly and earthy. Amy Conroy played a transgendered character in her Luck Just Kissed You Hello, in which a whole scale of gender was represented, making identities as intrinsic as they are constructed. Few pieces of new writing articulated that balance quite as artfully as Stacey Gregg’s Scorch, for Prime Cut, a sympathetic but sharp portrait of a gender-curious teen that asked trenchant questions about privilege and perspective.

Some of those questions chimed with Waking the Feminists, a movement born out of protest over the announcement of the Abbey’s 2016 programme but bound to have still more revolutionary consequences: it’s hard to imagine any organisation being blind to inequality, nor a public being silent about it. Some lessons are learned the hard way.

Chekhov’s First Play: Dead Centre’s immensely ambitious and exhilaratingly realised production put all of Chekhov on stage, demolished it, and addressed the protagonist in each of us.

DruidShakespeare: Druid doesn’t so much stage plays these days as create astonishment. Mark O’Rowe’s sculpting of Shakespeare’s history plays for Garry Hynes’s enthralling depiction of usurpations, successions and heroism of the people was a breathlessly regal achievement. And those costumes.

The Gigli Concert: Tom Murphy’s brilliant play about bruised humanity and achieving the impossible found a sterling production by David Grindley at the Gate, where Declan Conlon and Denis Conway mastered its music.

Pals: Never re-enacting history when they can summon up its spirits, Anu’s haunting encounter with the “Pals” brigades of the first World War was eye-opening and heartbreaking.

Love +: Further proof that the robots are taking over, or that people relate better to their gadgets than to each other, this innovative depiction of computer love was, ironically, a reassuring reminder of human ingenuity.

Waking the Feminists: Unless the Abbey’s 2016 programme is augmented to counterbalance its male saturation, its commemoration of the Rising may be something it has to live down rather than live up to.