Paula Meehan: the poet at 60 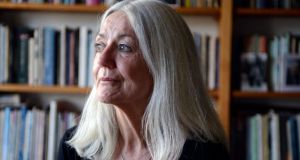 “I’m just delighted I survived. I still can’t believe it. I keep reminding myself I’m only a whippersnapper. If I glimpse myself in a mirror, it’s like, who’s that?” Paula Meehan, at her home in Dublin. Photograph: Dave Meehan

When Michael D Higgins hosted a cultural evening in the Forbidden City in Beijing on his state visit to China in December, he invited Paula Meehan to read six poems from her book Dharmakaya, a collection inspired by The Tibetan Book of the Dead. Translations by Huiyi Bao, a student at University College Dublin, were inserted into the programme. Obliquely, the poems were a cry from the heart of a philosophy under threat.

It’s more than 40 years, and nine books, since Meehan emerged from childhood in the inner city Dublin tenements to give voice to the disenfranchised everywhere, less in anger than with compassion and an intuitive understanding that, through verse, imbued their lives and memories with mythic dignity.

“The work of poetry makes a better fist at arriving at what is human in the world than most things,” Higgins said in 2013. He was announcing Meehan’s appointment as Ireland professor of poetry, a three-year job rotating between Queens University, Trinity and UCD during which, through workshops and readings, she hopes to bring together “the energies of the academy and the energies of the street”.

Eavan Boland has marvelled at her “wonderful zest and warmth of tone”, noting that her “themes are daring and open up new areas for her own work as well as for contemporary Irish poetry”. To England’s poet laureate Carol Ann Duffy she is “that rare and precious thing – a vocational poet of courage and integrity”. Last Tuesday she was inducted to the Hennessy Hall of Fame for her achievements in poetry.

Now here she is in Roly’s Bistro, a tiny figure with flowing white hair, making her way between the tables like a feather caught in the breeze of lunchtime chattering. We sit at a window looking out on Ballsbridge. She sips sparkling water. A puppy she got at Christmas chewed her credit card. “It’s as if he’s wired to the moon. He takes a ball to the top of the stairs, drops it, chases it, and he’ll do that all day.”

Born in 1955, she was brought up by her grandparents while her parents were looking for work in England. “We lived on the corner of Sean McDermott Street and Gardiner Street, which is gone now. My childhood city is practically obliterated, the last coherent community in the north inner city. The people had nothing, but they had a sense of sharing. I grew up in an oral tradition. I got my language there.

“I’m not nostalgic for the poverty, but the attempt to ameliorate those terrible living conditions led to much displacement and breaking apart of the community.”

She remembers hiding under the table and listening to things she couldn’t begin to understand until she was older. Her granny would see her. “‘Out!’ she’d say. ‘Out.’ And up on her lap , the smell of kitchen and sleep. She’d rock me. She’d lull me. No one was kinder.”

Her mother died at 42 . “And I was convinced I would, too, when I reached that age. But my doctor assured me I was fit as a hoot.” This year Paula will be 60. “I’m just delighted I survived. I still can’t believe it. I keep reminding myself I’m only a whippersnapper. If I glimpse myself in a mirror, it’s like, who’s that?”

She lives in Baldoyle with poet and broadcaster Theo Dorgan, whose childhood in Cork in many ways parallels her own.

“I’m eldest from a family of six, he’s the eldest of 15. He had to take responsibility from an early age. He jokes that he became Secretary of the Soviet of Orphans. There’s something fearless about him. He understands people and sees something in everyone, yet at the same time knows when to remain detached.”’

Paula’s grandfather taught her to read and write. “Without that I don’t know how I’d have survived school. Underlying everything was a sense that girls didn’t need an education. We were learning the skills for young girls to go into service or factories. So being able to read and write from the start was like a weapon. It gave me independence.”

She moved to Finglas as a teenager. “There were bands everywhere. Music was a great unifying culture. We were the first global generation. We felt connected with what was happening in the world. Thanks to O’Malley’s free education scheme, we were now allowed to go to secondary school and university.”

The nuns at St Michael’s Holy Faith Convent didn’t know what had hit them. “They couldn’t handle girls coming in from what they would see as corporation housing. I was not compliant . . . So I didn’t last long. We were absorbing the language of protest and reading about revolutions. I led a protest. So they threw me out. Looking back I’ve a lot of sympathy for them having to put up with us. It must have been a culture shock for them. But for us it was a sense that we had a right to education.”

She studied for the Inter Cert by herself and went to vocational school for the Leaving Cert, which got her into Trinity College.

“I wasn’t a good student. I just did the things I wanted to do. Eiléan Ní Chuilleanáin taught me etymology, the history of words and sounds. I couldn’t wait to get to Greece listening to WB Stanford, a great classicist. I’d skip lectures for street theatre with Jim and Peter Sheridan, Neil Jordan, Garret Keogh and Suzie Kennedy.

“I’d scribbled poems since I was at school, inspired by music and songs. But I didn’t have confidence in my writing. I was surrounded by very strong and articulate men and they were the writers. It was a very male milieu. I became a secret writer.”

She dropped out for a year, hitching to Crete “to walk in the landscape that gave rise to the ancient myths, to stand in the cave where Zeus was born”. This sense of the past in the present, the living myth embedded in landscape, fed into to her memory poetry. It was enhanced when a scholarship brought her to America to study for an MA in creative writing with James McAuley and the Beat poet Gary Snyder.

“The northwest was a vital place for poetry. It had only been settled 100 years before. Looking back through the stories of the indigenous population gave me a new take on our own early culture, which was also full of stories and songs about hunting and fishing.”

Dublin now seemed to her “a haunted city, haunted not just by my own childhood but through the architecture by all the people who had lived before.” Kevin Byrne, who remembered her poems from a John McGahern workshop, published her first collection Return and No Blame at Beaver Row Press in 1984, an eye-grabbing debut from the very first page:

“The legion of Mary’s virgins

And arraign their innocence

While a fat priest’s pink finger

Let drop the hammer on the nail.”

Although it caught the attention of Eavan Boland, it didn’t pay any bills. As the 1980s recession deepened, Paula moved to Leitrim, living on the dole. Some of her poems were published in New Irish Writing, which had just moved from the Irish Press to the Sunday Tribune. It gave her the confidence to write her long breakthrough poem The Statue of the Virgin at Granard Speaks, which was inspired by the death of a 15-year-old who came to give birth at the statue’s feet:

“They kneel before me and their prayers

that blaze a moment, then wink out.”

Tom Murphy wrote a wonderful letter which she read and read until it was in shreds. “That galvanised me. Feck it, I thought, I’m going to stand up for the word.”

Poetry can be many things to many people. Jeanette Winterson has called it “a shot of espresso, a rope in a storm, a conversation across time”. Paula likens making a poem to a child at a window making a mark with her breath. “It’s something we’ve all done, and I still do.”