Paul Simon coming to Dublin in April for Heaney tribute

Singer joins the stellar line-up at One City, One Book concert 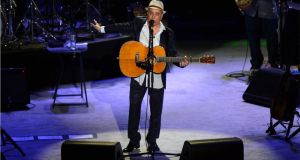 Paul Simon in concert at the O2 in Dublin in 2012. Photograph: Dara Mac Dónaill

Paul Simon is coming to Dublin in April, to perform at a tribute to the late Seamus Heaney.

Simon is the latest addition to the event at the National Concert Hall in Dublin, which is being organised as part of the One City, One Book celebrations. This year’s book is If Ever You Go: A Map of Dublin in Poetry and Song . Heaney’s work features in the anthology.

Simon first met Heaney through the poet Derek Walcott, and he was in the Abbey Theatre in 1991, when Heaney gave a reading from his book, Seeing Things . In a tribute to Heaney, published in the New York Times last year, Simon wrote: “I’m a fan even more of the man than the poetry, though there are few poets I would rank as his equal.”

The event is being organised by Poetry Ireland and Dublin City Libraries. Maureen Kennelly, director of Poetry Ireland, said: “Paul Muldoon has a close friendship with Paul Simon and that’s how we made the approach.” She says Simon is making the trip as “a measure of how much he thought of Seamus and his work”. Paul Simon last performed here in 2012.

The event takes place on April 23rd and among those taking part are President Michael D Higgins, Paul Muldoon, Medbh McGuckian, Gabriel Byrne, Dónal Lunny, Michéal Ó Súilleabháin, Zoë Conway and Paul Brady. A limited number of extra tickets were released this morning, and were available from nch.ie or by calling 01-4170000. Tickets cost €15.

‘Black hair is so much more than hair’: Emma Dabiri’s passionate exploration of identity