Two themes dominate the songwriter’s latest, remarkable album – the death of her Irish-American father, and an American predilection for war 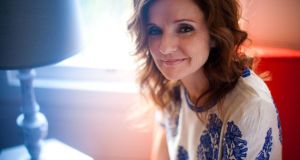 Patty Griffin: ‘I don’t have a naturally strong voice. I have to work like an athlete to keep it’ 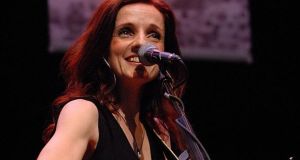 Patty Griffin: punctuates thoughtful observations with a nervous, high-pitched laugh, but there is a steely centre to her creative imaginings

‘I wrote a lot of it before he died. I was kind of bracing myself for that because you know it was going to be big. I was connected to him pretty strongly. And I didn’t think at the time ‘I’m going to be glad to have these songs to sing later’. As a matter of fact, after he died [in 2009] I couldn’t touch them for a while. But now it’s really great to have them, they keep his spirit going for me.”

American singer-songwriter Patty Griffin is musing over the origins and inspiration for American Kid, her latest album, released earlier this year to great acclaim. Although it is her eighth studio album since her debut in 1996, with Living With Ghosts, it is the antithesis of routine. She takes great risks and equally great care in her attempt to capture the essence of a man she loved deeply. And while not all 12 tracks are directly about Larry Griffin, a quiet first-generation Irish-American teacher from Maine, each song seems touched by him, his life, his experiences, his triumphs, his disappointments.

“I noticed that too,” she says on the phone from her home in Austin, Texas. “I didn’t intend them to be about him but they could be.”

In her sensitive salute to her father, she delivers a number of emotional right hooks that anybody who has gone through the loss of a parent will recognise. It is a wake of sorts, with humour bawdy and gentle, painful reflection and clear-eyed recollection all mixed in with a profound sense of personal loss. And yet it is also beautiful, haunting and evocative.

“This is a wanderer’s culture over here and my father was definitely a wanderer. There was always a sense about my father that he would have just loved to go, to hit the highway. He always talked about going to California, going west, and I remember, when I did my first tour of America, driving through Wyoming at dusk and seeing those great plains and huge dusty mountains, and saying to myself: wow, my father would just love this.

“He was never going to get out there – he never did, never got past the Mississippi river, I don’t think. But there is this moving, moving, moving thing that goes on, and it keeps people separate from their inner life or something. If you’re moving fast, you’re not feeling things the way [you do] if you’re still. And I think my father was pretty determined to make friends with the stillness, and he lived in a small corner of Maine on the edge of a forest, so I think he did pretty well with that.”

One of the most heart-rending tracks is I’m Going to Miss You When You’re Gone. “People are so separate from themselves here, they don’t have a home inside of themselves, and so they can’t imagine anybody is going to miss them,” she says. “They don’t really know where they’re from. They don’t have a centredness.

“In Ireland, people know how to talk, they can be very funny and entertaining, though I’m sure there is a lot of emptiness there too, though it is well-masked, but there seems to be more of a rootedness. They’re more relaxed, they’re okay with where they’re at, more so than here.”

Griffin punctuates thoughtful observations with a nervous, high-pitched laugh, but there is a steely centre to her creative imaginings. Now 49, she is very much a singer’s singer and a songwriter’s songwriter, one whose modest commercial success is balanced by critical acclaim – including a Grammy and an American Music Award. Unlike her father and his hyphenated identity, she identifies as American (her mother is from old French-Canadian stock). However, when she visited John Street in Dingle, where her grandmother was born, “I really did feel something. There was something really tribal for me – I was not expecting that.”

She will return to Dingle in December to perform at Other Voices.


Horrors of war
One of the recurring motifs on the album is war. Her father fought in the second World War, and those grim memories were still vivid in his later years.

“It is pretty easy here to get the fervour of going to war. There are a lot of people floating here, they don’t have anchors, so it is pretty easy for war to be marketed. War here is a getting-together to show that you are part of something.”

Another song, Faithful Son, refers to the challenges of belief. She says her father felt he should be a believer.

“He was very Irish – he was very western Irish, his mother was from a very Celtic place – and he was very into nature. He was really into nature. He lived on the edge of a forest, and he was in there all the time, probably trying to keep himself sane. He lost his sight, he lost his hearing, he went crazy and he knew it. This is the way a lot of people die. I think he was really shocked. He thought there was going to be some kind of relief at some point, but the moments of relief in life are very brief and there is no reward.”

There are references to Catholicism sprinkled throughout her songs, though not necessarily Irish Catholicism. “I was raised in a largely French-Canadian and very Catholic town in the state of Maine that was also the home of the native American Penobscot nation – who were also Catholics, with their own church, which we sometimes attended. So my Catholicism came largely from those worlds. There are certain things about my perception of all that that I like to attribute to being half Irish.”

But her major influence has no Irish connection. “James Baldwin was the first writer that cracked something open in me about getting down to the bone of things in my own writing. He was relentlessly honest with himself when he wrote, so the integrity was in the bag. Then he just went on to write it beautifully. So strong and vulnerable all at once.”

In many ways that sums up Patty Griffin as well. You hear it in her songs and in her singing of them. “I don’t have a naturally strong voice. I have to work like an athlete to keep it.”

She is also difficult to lock down into any one genre, given her ability to shift between folk, country, rock, soul and gospel. “I always just think of myself as a singer, so the labelling is for someone else to do.”

She also relishes learning new things, which led to a recent stint as back-up singer for Robert Plant’s Band of Joy, the Led Zeppelin’s singer’s continuing exploration of Americana.

“I loved that, because I have always loved back-up singers. I love watching footage of Ike and Tina Turner back in the day. They were astonishing. But when you go to the left of the frame, there are these backup singers standing there and they are out of this world. I love Emmylou Harris’s ability to pull a song out of the gutter. I love the way harmony works. I started years ago trying to learn how to do that, and when this came along I was just so excited to get a chance to do it. Not being up front – I loved it. It was an amazing experience.”

as well in that, when the tour ended, she and Plant were in what she calls a “residual relationship”. Their roles are reversed now, with Plant occasionally helping out Griffin onstage.

As her live albums testify, you can believe her when she says that “some of the best moments ever for me are singing on a stage”, but a Plant appearance at her solo show in Dublin would add a certain spice.

“I will keep my fingers crossed on that,” she says.

American Kid is out now. Patty Griffin plays Cyprus Avenue, Cork on Tuesday, the Spirit Store, Dundalk on Wednesday and the Sugar Club, Dublin, on Thursday, and will perform at this year’s Other Voices festival

The poisonous myth: Democratic Germany’s ‘stab in the back’ legend
9