Patrick Freyne’s 2015: Don’t let them spoonfeed you – dish out your own art

If 2015 has taught me anything, it’s that art is not a spectator sport – everyone can join in 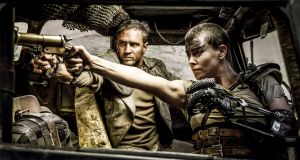 What I learned from art this year was that I want to make some of it. I went to singing weekends held in Northumberland by the folk band The Unthanks, listened to my mother-in-law’s beautiful choir and considered the anarchic visual art of my little nephews. It turns out I like group singing and the abstract expressionism of small children.

I also like making things. You see, there’s a sad notion out there that nobody should be making art unless they are a child or a bona-fide genius. This learned helplessness is terrible, but we didn’t lick it off the stones. In the 20th century, communally based folk art was replaced with a mass-media model that divided people into artists and spectators.

John Carey, in his book What Good Are the Arts?, writes about the formation of the Arts Council in Britain and how it was decided not to encourage art by the people but to celebrate art for the people. That’s the model that most arts councils followed, the one in which good art is spoon-fed to the masses like medicine, in order to make them better people. But art doesn’t really make you a better person (there are a lot of cultured, well-read asshats in the world) and you certainly get a lot more fun from art if you’re involved in making it.

So I’ve decided to make more of it. I’ll start by reading Elizabeth Gilbert’s Big Magic, in which she encourages readers to live “a life that is driven more strongly by curiosity than by fear”. Yeah, I know a lot of you are doing that already. So here’s to community orchestras, choirs, punk bands, writing circles, painting classes, slam-poetry events, local theatre groups and good old-fashioned individual weirdness. Bring art into the community. Make more of it. Some of you are geniuses who don’t know it yet. The rest of you won’t regret it.

The Complete Eightball: The eerie, funny, moving Eightball comics of the American artist Daniel Clowes, now collected in one place.

Trigger Warnings by Neil Gaiman: Another collection of funny, disturbing, moving stories from the master of fantasy writing.

No Cities to Love by Sleater-Kinney: The reconfigured three-piece remind us how it’s done with wiry, rugged guitar and uncompromising, mix-shattering vocals.

Grayson Perry’s Dream House: The Turner Prize-winning potter builds a tribute to “thwarted female intelligence” in the shape of a doll’s house.

The Best of Enemies: The fascinating story of the bitter television debates between William F Buckley jnr and Gore Vidal, which led to today’s gladiatorial current-affairs coverage. Also on Netflix.