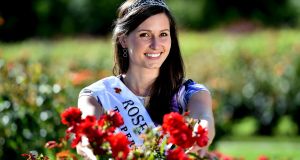 The reality of what it means to be the Rose of Tralee only dawned on Maggie McEldowney when she saw the morning newspapers.

Almost without exception they had her on the front cover. “Gosh,” she said looking at the sheaf of newspaper clippings, “I had no idea.”

The Chicago Rose (27) is from the south side of that US city. Her paternal grandparents are from Maghera and Draperstown, Co Derry; her mother’s family are from Bohemia in the Czech Republic.

Her middle name and her mother’s maiden name are both Rose.

Like the 2014 Rose of Tralee Maria Walsh two years ago, Ms McEldowney failed twice to be selected by her chosen centre before succeeding on the third time. She became involved in the Chicago Rose Centre, and “just dove head first into it”.

Almost her first duty as the new Rose of Tralee was to parry questions from the media about abortion, following the comments on stage by the Sydney Rose Brianna Parkins (25) on Monday night.

Ms Parkins called for the repeal of the eighth amendment of the Constitution governing the right to life of the unborn. No matter what way the question was phrased, Ms McEldowney was non-committal on the issue.

“No offence to the Sydney Rose, but at this point I’m just trying to focus on what’s ahead and all the wonderful things we’ll be doing this year,” she said. “As a representative of the festival, I’d like to take the neutral ground on it.”

She was happy, though, to talk about the festival, what she is going to do in the coming year, and her Catholic faith.

She works as the director of development for Marist High School, a prominent Catholic school in Chicago. Religious schools are not funded by the state in the US, so she is largely engaged in fundraising.

“I grew up in a very loving Catholic faithful home. We go to Mass together regularly. We take my grandpa to Mass on Sunday morning. It has helped to shape and mould who I am today. My faith is a very important part of my life.”

The controversy over the Sydney Rose’s comments and the stage invasion by serial Fathers4Justice protester Matt O’Connor, propelled the festival to a new level of engagement on social media. The festival trended worldwide on Monday night. Viewing figures peaked at 743,800 on Tuesday, slightly down on the 2015 peak of 760,300.