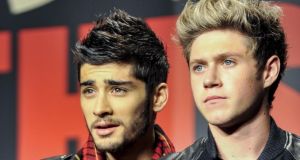 One Direction star Zayn Malik has quit the boyband’s world tour after being “signed off with stress” and is coming home to the UK.

It comes after the singer was forced to defend himself online and declare his love for fiancee Perrie Edwards after pictures emerged of him apparently close to another woman.

A spokesman for the band said: “Zayn has been signed off with stress and is flying back to the UK to recuperate. The band wish him well and will continue with their performances in Manila and Jakarta.”

It comes the day after the heartthrob, whose fiancee is a member of girl band Little Mix, told his 14.1 million Twitter followers: “I’m 22 years old ... I love a girl named Perrie Edwards. And there’s a lot of jealous f***s in this world I’m sorry for what it looks like x”.

I'm 22 years old... I love a girl named Perrie Edwards. And there's a lot of jealous fucks in this world I'm sorry for what it looks like x

A picture, which has been widely shared and published online, showed Malik with his arm around the bare stomach of a woman in a cropped top.

They look like they are posing for the picture and are both smiling, appearing to be cheek-to-cheek.

A second photo, taken from behind, shows Malik standing close to the woman and their hands and arms appear to be interlinked.

The pair appear to share a love of tattoos, with both of their arms adorned in designs and the woman also has a tattoo down her side.

Malik has a solo track coming out. But talking to Tabloid newspaper the Sun, the track's producer Naughty Boy said the band’s fans shouldn’t worry about him leaving One Direction. “This is just like a side gig and I don’t think there is anything wrong with it. It’s a good time for Zayn to showcase what he really can do.”