Will you pay €90 to see Guns N’ Roses in a hilly field in Meath?

Jim Carroll: The band are the latest heritage act to make the journey to Slane, a venue they last played in 1992

Guns N' Roses will perform at Slane castle on May 27th. The announcement was made by Lord Mountcharles's children Alex and Tamara at a press conference in Dublin city centre pub Bruxelles. Video: Bryan O'Brien 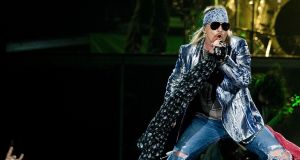 Axl Rose of Guns N’ Roses performs at the O2 Arena in London in 2010. the band are to play Slane Castle, Co Meath in 2017. Photograph: Ian West/PA Wire

Would you pay good money to stand in a hilly field in Co Meath to watch Guns N’ Roses? In 1992, tens of thousands of Irish people were prepared to do just that, but that was when the US rock band were at the height of their powers

There was also the fact that there wasn’t much choice in 1992 when it came to live music. The gig-going experience was a much less sophisticated beast, as anyone who survived Feile’s trips to Tipp will recall. The Irish live music fan back then didn’t expect much, bar decent weather, a burger and a badly made souvenir T-shirt or headband to take home.

Another change is that the band who’ll play Slane Castle next summer are also not quite the band they used to be. Their last visit to Co Meath came on the back of their hugely successful brace of Use Your Illusion albums when they were high on the hog and appeared unstoppable.

However, that old chestnut “personal differences” brought discontent to the ranks and various departures. Founder members Izzy Stradlin and Steven Adler are long gone (though the latter did appear with the band in Cincinnati in July) and the current reunion line-up boasts the presence of Axl Rose, Slash and Duff McKagan, alongside those who’ve survived the various incarnations of the band over the years.

The 2010 line-up were behind one of the most colourful episodes in Irish live music history. That occurred at the then O2 when the band came on stage 90 minutes late to a less-than-friendly reaction and a battery of bottles and other items from the audience.

The band left the stage in a huff after the fourth song but, following a passionate appeal from promoter Denis Desmond to the crowd for calm, returned an hour later to finish the show. The band’s other Irish appearances since Slane, at Dublin’s RDS in 2006 and a return to the O2 in 2012, were relatively peaceful by comparison.

But it’s a big jump from the O2 to Slane and there may be a question mark over the band’s current pulling power. Reports in the Wall Street Journal noted that some of the summer stadium shows on the US leg of the tour did not sold out. Modern gigonomics means promoters require a sellout or near sellout to meet the high costs of putting on the tour.

Promoters Live Nation rebutted this claim by saying the tour has “already grossed more than $100,000,000 in ticket sales” and that it expects to sell over a million tickets.

Another question about the forthcoming gig is just how attractive Slane Castle is for a new generation of music fans. In an age when gig-goers have a wide range of choices, from boutique festivals to large-scale venues such as the 3Arena in Dublin or the SSE Arena in Belfast, Slane is nowhere as potent or as essential as it once was, especially with its many infrastructural drawbacks (give yourself plenty of time to get out of the venue after the show, for a start).

Slane has also done itself few favours with the acts it has booked over the years. While the venue likes to trade on past glory days, featuring such superstar heritage acts as Bruce Springsteen, the Rolling Stones, U2 and Bob Dylan, you hear little mention of other headliners such as Stereophonics (2002), Bryan Adams (2000) or Bon Jovi (2013). We’ll soon find out the appetite for those €89.50 tickets (plus Ticketmaster charges). If you’re hearing a lot of radio ads for Guns N’ Roses in the coming weeks and months, chances are there are still some tickets to shift.