‘Heartworm’ is one of Irish music’s most acclaimed albums but it brought Whipping Boy little success. Twenty years on, the former band members reflect on its complex legacy

Myles McDonnell sighs at each passing compliment feted upon Whipping Boy’s second album, Heartworm. It’s not an impolite gesture. The former bassist couldn’t be more proud of the esteem in which his band’s 1995 album is held. His resigned response is borne out of years of frustration – years of thinking, what if?

Released just over 20 years ago, Heartworm is a record beset by what-ifs. A relative commercial failure on release, it has since become regarded as one of the great Irish rock albums. From the menacing disdain of We Don’t Need Nobody Else to the inebriating nostalgia of When We Were Young, how Heartworm didn’t spark a career beyond the band’s split in 1998 remains, for many, incomprehensible.

Two decades on McDonnell, guitarist Paul Page and drummer Colm Hassett pore over the past with a sense of pride tempered by melancholy. Singer Fearghal McKee is also proud but still emits a certain wildness.

In 1993 Whipping Boy were into their fifth year and had two independent record deals and a failed debut album, Submarine, behind them. Holed up in a damp and dingy Dublin rehearsal space, the band began to feel any optimism dissipate.

“The circle of people around the band were starting to disappear,” says Page. “We were asking, ‘was it really worth it?’ Then we wrote We Don’t Need Nobody Else as a kind of defiant thing and that seemed to be the catalyst that triggered something.”

The song signalled a new dexterity. Where previously they had mimicked contemporaries such as The Jesus & Mary Chain, here they honed an emotional intensity all of their own that led to songs such as Blinded and Personality. McKee’s vocal, previously lost in a swirl of frequencies, was now to the fore, showcasing his lyrical prowess.

“The best of everybody came out,” says McDonnell. “It felt honest. It felt like we had something to say and that there was some substance to Fearghal’s lyrics.”

Unreal honesty
In McKee, this direct approach brought out challenging lyrics that touched upon domestic violence and mental health. Although coy when pressed on individual lines, he credits his bandmates for facilitating such sincerity. “The fuckin’ honesty among us as a band was unreal,” he says. “Pure honesty. And it was safe. It was safe to write that.”

These new songs instigated a change in fortune. Sony’s Columbia imprint gave them a two-album deal in May 1994 and recording for Heartworm began that November.

“As soon as we signed the thing, I fucking had sparks,” says McKee, whose experience of Sony is at odds with his bandmates. Where he says the label “interfered all the fucking time”, the others disagree. “They didn’t interfere in the recording of Heartworm at all, which even the producer Warne Livesey was surprised by,” says Page. “We got to make the record that we wanted to make.”

It would be nearly a year after recording finished, however, before Heartworm emerged. By then the musical landscape had shifted. The UK music press’s obsession with the derivative Britpop movement – at its peak in mid/late 1995 – effectively torpedoed Heartworm.

Although the album entered the Irish Top 20, it failed to make the UK Top 40 and sold 80,000 copies worldwide, catastrophic as far as Sony was concerned. Whipping Boy were out of step with the prevailing wind.

Had Heartworm been released in early 1995, as was The Bends by Radiohead – and not three weeks after Oasis’ all conquering (What’s The Story) Morning Glory? – it may have fared better.

“We played Jools Holland in April or May or something like that,” McKee remembers. “Really fucking early. And the album wasn’t released until maybe six months later. The album should have been released three weeks later.”

Silly decisions
“We made some silly decisions and were advised, probably badly, by our management that cost us in the long run,” says McDonnell. “One of the biggest regrets is that we never played the US.”

“That killed us really,” adds Page. “We went over to New York to meet the US label and they were hugely enthusiastic. They had all these plans for the band and signed us up to support [Illinois rock act] Stabbing Westward on a six-week US tour.

“Then we got offered a support tour with Lou Reed in Europe. So our manager Gail Colson advised us to pull out of the US tour. The American label didn’t want to know after that. They literally went cold overnight.”

“We didn’t do enough touring,” adds Hassett. “Sony’s process was to use promo tours to break a band, so we were going around Europe doing interviews and not really playing gigs. That was a big mistake. We weren’t building a proper fan base.” 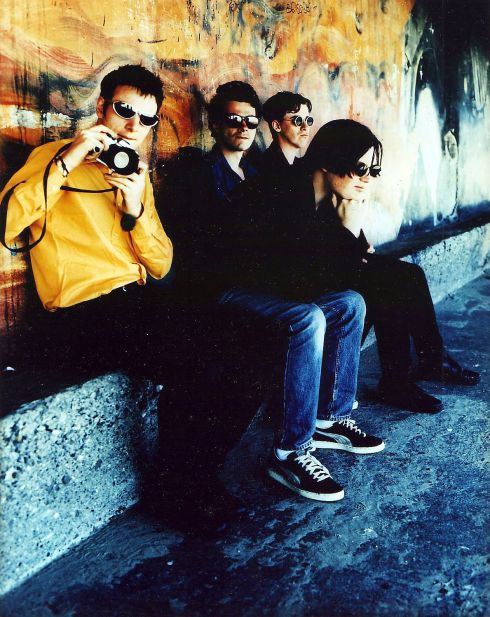 By mid-1996 a change of management at Columbia saw the band frozen out. They were advised to leave with a settlement rather than insist on a second album. “Our manager felt that there would be any number of record companies interested in signing the band,” says McDonnell. “So it seemed, at the time, like a win-win for us.” However, no offers came in and Colson cut her ties shortly after.

An under-appreciated third album, Whipping Boy, was self-funded in 1998 but, by the time it surfaced in 2000, the band was over. “The truth went after that third album because we all had different lives,” says McKee. “There was no falling out but we were all having families and kids. Life – the other life – was taking over.”

“Ultimately the lack of success of Heartworm cost the band,” says McDonnell. “It meant that we were on a timeline. The funds were going down. The morale was going down. And it’s hard to keep those things up when it feels like things are on the downslide.”

The band reunited for a run of shows in 2005, but things petered out. “I knew our time had passed at that stage,” says Page. “Bands have a certain time when they are vital and our time had passed. Even if we had written anything new, the chances are people wouldn’t have been that interested.”

Hassett and McKee toured again as Whipping Boy in 2011, this time without McDonnell and Page, who felt the band should only return with new material. They took “huge offence” when Hassett and McKee carried on regardless.

“It was something that myself and Paul would never have done,” says McDonnell. “I felt that we were genuine to ourselves when we did the 2005 shows. There was no room to play those songs any further than just cabaret, and I never wanted us to be that. I felt that we could have done something new. At the time, we were both very hurt.”

No reunion
That hurt has since passed, but McDonnell says the band has no future. An offer of a 20th anniversary show last month was turned down. “I would never play again with Whipping Boy on the basis that once anyone went out as Whipping Boy, without all four members, that would be it for me,” says Page. McKee and Hassett similarly see the band as finished. “Whipping Boy is gone now. It can’t be called back again,” says McKee.

Heartworm and the band’s final eponymous album were the mark of a band that had something inherently special. For McDonnell the big regret is about lost potential.

“That’s the real tragedy – where we might have taken it. I genuinely felt that our band would have matched anyone pound for pound. I don’t think Whipping Boy ran its course.”

“We captured something beautiful; something true. That’s fucking success.”

The Loafing Heroes: raggle-taggle songs about Casement and Kierkegaard