At this year’s Red Bull Music Academy, music’s cutting edge was honed by the best in the business in a glittering mix of recording, collaboration and performance. Laurence Mackin counts down the 10 things he learned on his tour of the Japanese capital 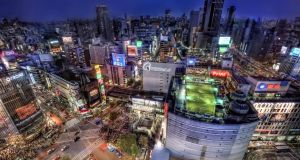 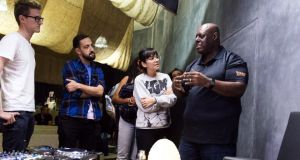 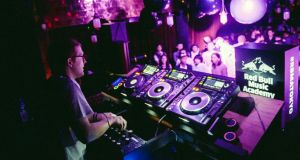 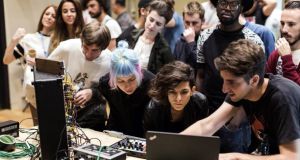 DJ James Holden and RBMA delegates at work in the studio

Each year, the Red Bull Music Academy (RBMA) invites two groups of 30 musicians – producers, singers, DJs and players – to come together in a new city to collaborate, record and perform. Purpose-built studios are on hand, and a series of additional lectures by some of the biggest names in music mean you have the cutting edge being honed by the best in the business.

This year’s RBMA took place in Tokyo, and The Irish Times was there for a whirlwind few days of gigs, lectures and discussions. Here are 10 things we learned at the cultural coalface.

1 There is no traditional route into music
Floating Points – aka Sam Shepherd – talked openly about going into a studio with engineers and “pretending I know what I’m doing but having no idea”. Experimenting with sounds, techniques and microphones might be the long way round, and it earns plenty of side-eye from more technically minded peers, but in Shepherd’s case it has delivered rich results. Also, his move into electronica and dance music came after he initially studied classical and jazz, a creative arc that is often reversed.

Shepherd was also quite honest about being initially clueless about the business end of music, and the intricacies of publishing deals and pressing vinyl, for example. That hasn’t stopped him setting up the well-regarded Eglo label, along with Rinse FM’s Alexander Nut. You can judge the results for yourself at their Dublin showcase in the Sugar Club on November 28th.

2 Know your equipment
This might be a bit of a contradiction to point one, but listening to veteran delegates at RBMA, it’s astonishing how hard they had to work just to get their sound up and running. House music pioneer Tony Humphries didn’t sound even slightly nostalgic when discussing the hassle his early crews had to go through to put on some of their mobile shows, when they were building up their reputations, carrying all their equipment and setting up every show from scratch in different venues.

Jah Shaka went into some detail on the nuts and bolts of developing a sound system in the early days of reggae. He and his contemporaries would track down an amplifier maker and then describe to them the sound they wanted, so the engineer could build the speakers and amps to specification.

Sam Shepherd has brought this notion bang up to date by building his own mixer.

Although he claims he’s “not very technical” he has collaborated with gear company Isonoe on the two-channel mixer, which has no slide faders and instead uses all-rotary pots. Shepherd likens the control over the sound on that mixer to that of a gas flame on a cooker. You can hear it in action at East London’s Plastic People, and Isonoe has plans to sell the units.

3 Join the community
People often talk about “scenes”, usually in a wistful, nostalgic tone of voice, but listening to the RBMA discussions, what comes across is that scene is just a slightly cooler word for community. All the delegates are full of praise for the musicians working around them, and many credit their own personal development to musicians who gave them time and advice along the way.

Often this simply involves words of encouragement, but Sam Shepherd, in particular, talked about how he got together with friends to fund a collective studio space – a vital bit of collaboration in London where space is at such a premium.

4 Music matters
Jah Shaka began his RBMA interview with a story about the role music played in the social fabric of his childhood community of Jamaican immigrants in southeast London. The Windrush generation were the pioneers of reggae, as Jamaican music stepped out of the shadows of American R&B and began to sing with its own voice. Their contribution to music, and to Britain’s rich cultural history, is inestimable. Shaka’s introduction served as a reminder of the power of music and an elegant riposte to the anti-immigration stance being peddled by the likes of Ukip.

5 Frequency not volume
The clubbing community in Ireland, and in Dublin in particular, is not exactly blessed with choice venues, and sound engineers have a tendency to compensate for failings in some areas of their sound with sheer, brute force and volume.

Jah Shaka described how working with the right frequencies was crucial to establishing the dub sound that helped root reggae. Tony Humphries detailed why the sound in Zanzibar – the near-mythical New Jersey club where he was resident DJ along with the likes of Larry Levan and François Kevorkian – was so good.

Zanzibar was built as a response to the emerging scene at NYC’s Paradise Garage, with local motel owner Miles Berger hoping to pipe some of the Manhattan club’s energy through the Lincoln tunnel. The sound in both was designed by Richard Long and Associates, and Humphries puts the punch in both clubs down to the mid-bass frequencies.

He reasoned that, when the music has impact – but you can still have a conversation with the person next to you, that’s the sign of a quality sound system.

There is also Jah Shaka’s assertion, backed up by some unnamed “professors from Cambridge”, that “bass helps the bowels of the body” and is “good for your digestive system”. We’re not qualified to disagree.

6 Have other interests
Quite a few delegates mentioned other interests and influences that have played a part in their work, but Sam Shepherd put in a decent pitch for the title of hardest working man at the RBMA

As well as his music career, Dr Shepherd has a nine-to-five job as a neuroscientist. He had to do his best during his RBMA talk to avoid spinning off into laboratory-like areas of discussion, but there’s no doubt that the two fields in which he works exert influence on one another.

7 Necessity is the mother of invention
According to Jah Shaka, the development of sound systems in Jamaica came about because of a lack of oil. With little of the black stuff around, few new records were being made because pressing them was so expensive. So a young Shaka and his contemporaries took to retooling existing records, and the dub tradition of sound systems was born. Give thanks.

8 Branding works
It’s been written about on these pages before, particularly by Jim Carroll: branding works. Not facile sponsorship of a gig or concert, or a social media campaign dressed up as arts philanthropy, but a committed effort by a company to help foster growth and innovation in an artform.

When the RBMA ships out of Tokyo, it will leave behind a world-class recording studio, which is available to local acts and academy members to use. This is in addition to the weeks of studio space, discussions and gigs that have taken place in the Japanese capital.

The RBMA has been taking place in different cities since 1998, which means there is now a global chain of RBMA studios making music. Whatever about the marketing benefits to the drinks brand (including, of course, articles such as this), it’s an impressive musical legacy.

9 An entire eco-system has collapsed
And music is the poorer for it. In the 1980s and early 1990s, DJs in NYC in particular would put on block parties and shows, advertised using flyers. Once they had a decent number of shows under their belt, they would take the flyers to record labels and, in conjunction with (hopefully) a burgeoning reputation, would argue that they were worth dealing with. Labels would then give them records for free, with the proviso that they filled out a feedback form on the record, advising why they did or did not like a specific tune. This mutually beneficial system has now all but disappeared.

In addition, many DJs took a three-pronged approach, as exemplified by Tony Humphries: DJing at night; playing records on a radio show; and production work in the studio.

As Humphries sees it, DJs have an obligation to seek out new talent and nurture it, be it on the airwaves, from behind the decks or at the sound desk. He has grave concerns now that this sort of local, scene-rooted help is no longer happening, and the industry is the poorer for it.

10 The future is ...
RBMA asked several people to imagine what music would be like in 2214. Tyler the Creator came up with Shout Box, a cube that fits in the mouth and modulates the voice to essentially replace all other instruments. Artist Yoshi Sodeoka reckons satellite-based music instruments will scan the globe for its mood and condition and make music accordingly to help calm nations down en masse.

Musician Seth Woods came up with the Spine, a wireless, digital exo-skeleton worn by musicians and dancers. And instrument designer Dave Smith reckons synths will still work with keyboards, but with 3D displays, simplified controls and no wires.

For more on RBMA Tokyo 2014, including lecture videos and live sets, see redbullmusicacademy.com

Matthew McConaughey: ‘I wouldn’t give back one ass-whupping for the values that are ingrained in me’
10