The Ticket Awards 2016: Our music writers select their favourite albums of the year 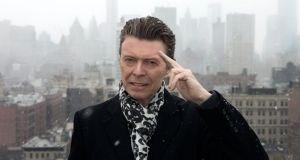 See something missing? Want to have your say? Vote now in The Ticket Awards . . .

DAVID BOWIE - BLACKSTAR
David Bowie experimenting with the form? We have been here many times, of course. But what was so invigorating about Bowie’s 25th studio album was how engaged he was with wanting to reshape his art. This was Bowie following the music he heard in his head... to the last note.

SOLANGE - A SEAT AT THE TABLE
Knowles looks at issues of race, identity and the current state of America – it makes for a stirring, engaged, fiercely determined record. A Seat At the Table is a timeless piece of art, a record in tune with the times, but one which is also remarkably timeless in sound and scope.

RADIOHEAD - A MOON SHAPED POOL
An album of textures and subtlety rather than a straight-up assault on the musical senses . We did not expect to get those psychedelic vibes, while Radiohead are certainly tapping into their back catalogue for many of these sounds and grooves.

ANDERSON .PAAK - MALIBU
Paak shows flashes of the same bravado you’ve heard from D’Angelo and Kendrick Lamar. The record is bright, striking and compelling, as old-school sounds and notions are beautifully embedded in a new, experimental hinterland.

ANOHNI - HOPELESSNESS
Social and political consciousness rank high on the agenda on an album that lives up to its title – in terms of lyrical themes, at least. Glittering synths and experimental rhythms are combined – and as musical statements go, this is a brave one.

BLOOD ORANGE - FREETOWN SOUND
With a riveting activist edge, Freetown Sound cuts every which way through highly charged subject matter. The soundtrack to such narratives of religion, race, sex and identity is a striking assortment of R&B balladry, spoken-word, NYC jazz-noise, and subtle/sweet traces of Prince-like pop.

KANYE WEST - THE LIFE OF PABLO
Whatever you say about Kanye West – and this year, yet again, has given a lot to say – few artists put as much of themselves into their records. Wayward, unpredictable, frequently inspired, often infuriating, and lyrically about as funny and honest as it is conceited and dumb, The Life of Pablo is an absorbingly ragged affair, just like West. Officially released only through streaming services, it is also theoretically unfinished – West revisited it frequently. Idiosyncratic and distracted as it seems, it may be the most clued in to how we listen to music in 2016.

BEYONCÉ - LEMONADE
Bursting with styles and influences, and combining personal and social issues, Beyoncé uses her powerful platform to educate and enlighten. An unusual album – and only Beyoncé could serve us something so refreshing.

CHANCE THE RAPPER - COLORING BOOK
Coloring Book pushes the Chicago rapper right into the centre of the action. Ambitious, compelling, joyful and audacious, it’s an album by a rapper laying down his bona-fides, digging into the roots and coming up with many reasons to be cheerful.

JAMES VINCENT MCMORROW - WE MOVE
A lot of guff is spoken about attention to detail when it comes to records, but it’s apparent that We Move has benefited from some careful handling. The songs are McMorrow’s finest to date, a clutch of tracks dealing with the doubts with which everyone approaches love, life, health and the future.

- Album of the Year is just one of the categories in The Ticket Awards 2016. You can read all about them via the links below, and vote for your favourite – or add your own choice . And everyone who takes part will be in with a chance of winning one of our fantastic prizes

Vote now for your favourite movies, performances, albums, artists, gigs and songs of 2016