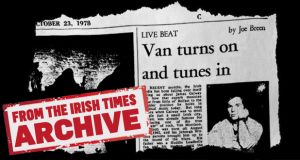 In recent months, the Irish media has been falling over itself telling us about James Galway and how that superb musician came from little ol’ Belfast to the premier position he holds in classical music today. But long before when Galway was to most people just a small Irish city, Belfast was already famous for producing one of the true "greats” of rock, Van Morrison. Morrison was born on August 31st, 1945, and his Jehovah Witness parents brought him up to the sound of the blues. His father was a Huddie Leadbelly fan and his mother sang the blues and jazz. At 15, he left school to become a professional musician and played in many local bands before joining the legendary Them when he was 17. Though the band broke in Britain with songs such as Gloria and Here Comes the Night, Morrison has said that Them was never really up to much.

When Them disbanded, he moved to the US to record with Bert Berns, a man who Morrison respected and who had produced some material for Them. He had a hit with Brown Eyed Girl in 1967, but then in 1968, Berns died and Morrison signed with Warner Bros, the company he still records with. Astral Weeks was the first fruit of the alliance and it became an underground classic. The following year, Moondance hit the shops and broke the "Belfast Cowboy" to a mass audience. Since then, Morrison has come to be accepted as one of rock's great masters, with Time magazine once naming him as one of the five most important living songwriters.

However, in recent years his career has slumped somewhat with critics instead of praising his work hacking at it — and with some justification. His last album, A Period of Transition was disappointing, especially as it was something of a comeback for him. But now comes Wavelength, and if you are a Morrison fan it is almost everything you want, and if you’re not, it is about time you were.

In the best Morrison tradition, the music is almost all effortless with the beautifully clear melodies and economical but devastating lyrics just making the right mix. Add to that his voice, which curves, sweeps and generally masterminds the whole operation giving the album the completeness that is a trademark of Morrison's best work. It is a mature and accessible work, but it never resorts to cheap tricks to get its message across; a message of peace and satisfaction, of life and living, of doing what is natural.

The musicians also seem to have picked up on "Van the Man’s" ease, and the playing is relaxed, but never insipid. It flows like the songs, drawing you in rather than hitting you directly. Listen to Kingdom Hall or Santa Fe (co-written with Jackie De Shannon, whom Morrison has produced) and hear for yourself that Morrison is back on the right wavelength.