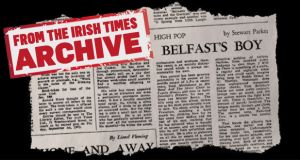 Belfast should name a street after Van Morrison. Of all the hard men from the industrial provinces of these islands who made their names during the 1960s by imitating black R. and B. (sic) singers, he alone has gone on to fulfil his promise — and I'm including Eric Burden and Joe Cocker. He has done it through perseverance, determination, steady toil: so a city that has always prided itself on its Puritan work-ethic could scarcely find a worthier offspring to honour.

His voice has never appealed to me as an attractive nor even a particularly expressive instrument. It has a harshly restricted tonal range, the timing is often clumsy, and it tends to go sharp on sustained notes. But the singing is only a small part of Morrison's music. He is an artist who has gradually achieved control over all the components of his material - he writes the songs, orchestrates and produces them. The result is an entirely distinctive sound which is always unmistakably his own.

This control has been growing perceptibly in the course of his prolific output of LPs in recent years, from Moondance to His Band And The Street Choir to Tupelo Honey, and new to Saint Dominic's Preview, his new release (on Warner Bros). The title song on this album strikes me as his most considerable work to date. It 's about sitting in San Francisco, watching a band march by, thinking how far he has come from Belfast and the rest of his past, realising that he has achieved what is thought of as success; and yet wondering why he still feels unfulfilled and in transit.

He is able to elaborate on all this by means of a much more expansive structure than his songs can usually tolerate. It’s rooted essentially in gospel music, but sustained by that peculiar amalgam of urban styles which Morrison has made his own.

There are only six other songs on the record, but four of them are easy-going numbers which swing along very pleasantly. The opening track, Jackie Wilson Said (I’m In Heaven When You Smile) is the best of them, with an integration of voice and instruments which is the tightest that Van Morrison has ever achieved. Borne along on the polished upbeat drumming of Rick Schlosser, the saxes of Jack Schroer and Boots Houston and the guitar of Doug Messenger build up an elegantly funky sound which is irresistible. It’s true that the lyrics are trivial - I pray that this will be the last time that a rock song exhorts me to "let it all hang out" or to get it all together or any other of those mindless apothegms - but the geniality of the overall enterprise triumphs even so.

Gypsy is built more or less on the chords of House Of The Rising Sun, but it features an attractive melding of various rhythms, from modified gypsy fandango to slow blues. I Will Be There is something of a curio, a regular old nightclub piece which you could easily imagine being sung by Buddy Greco or Al Martino. Messenger does those sophisticated transposed guitar chords, Tom Salisbury tinkles out some pretty cocktail-lounge runs on piano, and the sax section moans the right kind of riffs. There is, thankfully, no element of parody involved. The tongue merely favours one cheek rather than the other a little. The shortest song, Redwood Tree, is a simple but tuneful ditty.

That leaves the album's two failures, one partial and the other extensive. Unfortunately these tracks last, running respectively for 10 and 11 minutes, constitute more than half of the entire playing time. Both are slow, interminably repetitive, and virtually based on two chords. The notion, presumably, is to build atmosphere and drama. It works to a decree on Almost Independence Day, but it founders abjectly in Listen To The Lion, where Morrison's voice keeps crooning along low and then unleashing an outburst of melodrama and then resolving in to embarrassing bubbling and groaning noises which, are prolonged grotesquely.

Almost Independence Day has an arresting opening, with nice improvisation on 12-string guitar leading into a hypnotic combination of hissing cymbals and a steady growl on the synthesizer. Some fine effects are achieved with Morrison using his voice like a train siren, and the sound of fireworks imitated on stopped guitar strings. But again, the thing is grossly overextended.

One final point worth making in Van Morrison's favour: he has the gumption to give employment to such gifted and respected jazz veterans as Connie Kay and Leroy Vinnegar.