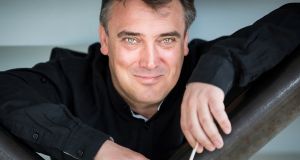 The Association of British Orchestras (ABO) held its big talking shop in Belfast last week, hosted by the Ulster Orchestra. The theme for the ABO’s annual conference was a timely one, Cross Borders.

The subject was looked at in terms of Brexit, the commissioning of new music, the digital world (scores, video and audio streaming), cities of culture, peripatetic conductors and, of course, “The Irish Scene”.

The ABO’s curiosity in this regard was focused on the ongoing convulsion within RTÉ that last July led to a Government-approved plan for the national broadcaster to relinquish control of the RTÉ National Symphony Orchestra while retaining full responsibility for the RTÉ Concert Orchestra. The upside for RTÉ is that a new strand of government funding will effectively allow the station to cap its financial support of the NSO.

The ABO session, chaired by the London Symphony Orchestra’s managing director, Kathryn McDowell, had contributions from Aodán Ó Dubhghaill, head of RTÉ’s orchestras, Simon Taylor, chief executive of the National Concert Hall, Allin Gray, director of the Association of Irish Youth Orchestras, Helen Boaden, who worked on the report which resulted in the current plan, and, a late addition, Richard Wigley, managing director of the Ulster Orchestra.

It was interesting to have Allin Gray remind us that the Irish orchestras which get the most attention — the RTÉ orchestras, the Ulster Orchestra, the Irish Chamber Orchestra and the Irish Baroque Orchestra — are just the tip of the iceberg. The Association of Irish Youth Orchestras has 85 members, and there are other amateur orchestras, too. The connection should be as obvious as that between youth sport activities and sport as a profession. It’s a connection that cuts both ways. The health and public perception of the professional world impacts on the ambitions of the young.

Ó Dubhghaill presented a potted history of how RTÉ got to the point of relinquishing one of its orchestras. Attrition and corporately-induced atrophy were used to create a self-fulfilling prophecy of dysfunction. Those, of course, are not Ó Dubhghaill’s words, although he did deal with the significant vacancies in the orchestras, the cuts to the orchestras’ education and touring, and the low morale that has inevitably ensued.

He still thinks the future “looks bright” and said he was looking forward to having 93 players in the NSO. Curiously, that target strength was announced 30 years ago, but never achieved. 89 is the figure in the Boaden review.

Taylor provided some interesting statistics. Only 15 per cent of events at the NCH are own-promotions. The RTÉ orchestras account for 25 per cent of events, with outside hirings accounting for the remaining 60 per cent. He presented the move of the NSO to the NCH as being all about “transformation”. The change will be legal not physical, as the NSO along with its administration is already based in the hall.

Taylor, not surprisingly, presented a positive slant on the repositioning of the NSO within the NCH. Boaden, on the other hand, made it clear that her report “didn’t make a recommendation that the NSO should be part of the hall”. In fact, it presented that as the second option in pursuit of its primary recommendation, which was that “The NSO should be a national cultural institution”.

The real hard work, she said will be the “granularity” of the negotiations between the parties implementing the move. There has not been much to show yet for the groups that have been set up by and the discussions that have been held between the Department of Culture, RTÉ and the NCH. Strange as it may seem, independent advice of any kind from any body outside of those three, has never been mentioned in relation to the Government’s plans.

The RTÉCO has also been without a permanent manager since Anthony Long was moved from that orchestra to the NSO two years ago. RTÉ, explained Ó Dubhghaill, is looking at the way the RTÉCO works, and he said a new manager would be appointed shortly, though he did not say the same about the principal conductorship, a vacancy of even longer standing. Coincidentally, during the conference, the Ulster Orchestra announced Daniele Rustioni as its next principal conductor, in a smooth transition from Rafael Payare, who has held the post since 2014.

In the context of resolving orchestral moves, it’s interesting that the ABO conference considering the Irish situation was held in Belfast. It was back in 1980 that the Musicians’ Union in Britain held a nine-week strike at the BBC. The union was fighting orchestral downsizing which was part of a wider tranche of BBC job cuts.

Such efficiency seems a million miles away from the Department of Culture/RTÉ/NCH situation.