U2 tickets go on sale with Dublin dates still unconfirmed 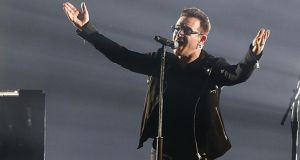 Tickets for U2’s upcoming 2015 tour are now on general sale through their website U2.com, although dates for the expected Dublin shows have yet to be announced.

The new tour, entitled iNNOCENCE + eXPERIENCE, will be the band’s first arena tour in a decade, playing in 19 cities worldwide.

While no dates for the Dublin concerts have been announced the band said on its website “special shows are being planned for Dublin for the end of next year to benefit the U2-initiated Music Generation project”.

The Music Generation scheme helps provide tuition and instruments to children in Ireland and is co-funded by The Ireland Funds and the Irish government.

In 2009 U2 gave the profits from the three concerts they played at Croke Park (estimated at € 5 million) to the scheme.

The north American leg of the tour will start in Vancouver on May 14th and ends in Madison Square Garden in New York City on July 23rd.

The European leg begins in Turin on September 4th and ends in Paris on November 11th.

The tour follows the release of their latest album Songs of Innocence which was given away free to all iTunes customers earlier this year.

Love Island: It’s deranged. What am I actually watching?
4

Looking for a haunting tonight? We’ve found 13 of Ireland’s most haunted places
5

‘We are the weirdoes, mister’: Why women love witches
9