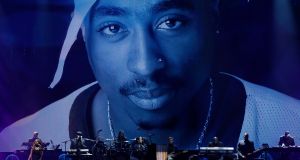 The late rapper Tupac Shakur is honoured at the 32nd Rock and Roll Hall of Fame induction ceremony in New York, US. Photograph: Lucas Jackson/Reuters

Late rapper Tupac Shakur and 1960s protest singer Joan Baez were inducted into the Rock and Roll Hall of Fame on Friday, on a night where nostalgia was mixed with calls to political action.

Former Journey frontman Steve Perry reunited on stage with his Don’t Stop Believin’ bandmates for the first time in 25 years at the event in New York, while Roy Wood of Electric Light Orchestra attended the ceremony 45 years after leaving the English band.

But one of the strongest moments came from long-time activist Baez (76), who told the Hall of Fame audience: “Let us together repeal and replace brutality and make compassion a priority. Let us build a great bridge, a beautiful bridge, to welcome the tired and the poor.”

Baez then played an acoustic version of the traditional spiritual Swing Low, Sweet Chariot, saying afterwards that she hoped the song’s band of angels were “coming . . . to carry me, you, us, even Donald Trump, home”.

Baez enjoyed a new round of fame this week through a protest song called Nasty Man, which she wrote about US president Donald Trump.

It was her first songwriting effort in 25 years and a recording of the song has been viewed some 3.3 million times since it was posted on her Facebook page on Tuesday.

Emotions ran high for the induction of Shakur, the Harlem-born rapper who was gunned down at age 25 in 1996 in a drive-by shooting in Las Vegas that has never been solved.

Shakur, whose songs about social and racial injustice still resonate today, was only the sixth rap act to be inducted into the Rock and Roll Hall of Fame in its 30-year history.

Fellow rapper Snoop Dogg recalled how in the early 1990s he and Shakur were “two black boys struggling to become men.

“Tupac, we love you. You will always be right with us. They can’t take this away from you homie,” he said, accepting the Hall of Fame statuette on Shakur’s behalf.

British progressive rock group Yes and Seattle-based grunge band Pearl Jam were also among the 2017 inductees, who were chosen by more than 900 voters drawn from the music industry.

Artists are eligible for induction 25 years after the release of their first recording.

Disco producer Nile Rodgers, the man behind 1970s hits like Le Freak and We Are Family, was presented at the ceremony with a special award for musical excellence.

Tributes were also paid to Chuck Berry, who died last month at age 90 and who was the first person ever to be inducted into the Rock and Roll Hall of Fame in 1986, and Prince, who died of an accidental painkiller overdose in April 2016.

The Harpy: The untethered rage of a woman scorned
9