Tributes can be great, but beware those jumping on the hearse-shaped bandwagon

Musical tributes to dead artists are often magical, but it’s clear that some stars who take part are seeking some degree of ego-enrichment from the experience 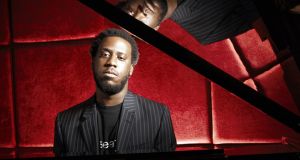 Robert Glasper: the jazz artist’s cover of Prince’s ‘Sign O’ The Times’ is a standout example of a fitting musical tribute

This has unfortunately been a good year for tribute gigs. The deaths of such talents as David Bowie and Prince have seen a host of acts pay tribute to the fallen in myriad ways. For many, it’s often as simple and powerful as a well-chosen cover or a heartfelt reference at a show of their own.

We’ve seen Bruce Springsteen do it again and again – indeed, remembering former members of The E Street Band has become an important part of his show in recent times. Springsteen dedicated Tougher Than the Rest to the late, great Muhammad Ali at London’s Wembley Arena earlier this month.

During their run of shows at Dublin’s Vicar Street in April, Bell X1 paid their respects to Prince with a subtle, sublime hue of Purple Rain in the middle of the set.

Musicians understand musicians. They’re on the same wavelength and know what works and what doesn’t. There’s an empathy you get with such unforced and unplanned occasions which is often touching. It reminds you that music still can work in wonderful, magical ways.

The problem comes when the tribute gig industry kicks into gear. For instance, two of the biggest live music companies in the world are aiming to get in on the act with proposed Prince tribute shows in the coming weeks and months.

AEG, which promoted Prince’s record-breaking run of 21 shows at London’s O2 Arena in 2007, is putting a brace of shows next week at the Eventim Apollo which will benefit Autism Rock, a charity which Prince supported in recent years. The night will feature Cee-Lo Green, Mark Ronson and Morris Day and The Time.

Meanwhile, determined as always not to be left out if there is something going on, Live Nation is planning a show some time this summer in Prince’s Minneapolis home town. Details are still sketchy, although there is talk that Prince’s family and former bandmates will be involved.

On the bandwagon
Of course, these aren’t the only Prince tribute shows scheduled. When you do an online search, you’ll find tribute shows happening across the planet. Be it Las Vegas, Los Angeles or Glastonbury (the festival will be remembering both Prince and David Bowie this year), there are many people seeking to remember the Minneapolis sorcerer. Many of the participants will have their hearts in the right place, but others will be seeking some degree of ego-enrichment from the experience.

It is often a case that the tribute becomes a bandwagon and acts feel they have to jump on board as fast as their feet will carry them. If everyone else is doing it, they’d better join the gang.

It is worth noting that none of these tribute shows will come within an ass’s roar of what the man himself would have done on the stage. You could argue that this goes without saying, but there is always a mistaken belief that some tribute shows can raise the roof, scale the heights and all those other cliches.

Yeah, but Prince would always have soared further and louder.

Perhaps the best way to remember the late, great ones is with music, which is where we came in a couple of paragraphs ago. One of the best Prince tributes I’ve come across in recent weeks is Robert Glasper’s lovely version of Sign O’ The Times which can be found on Soundcloud.

Originally recorded for his Covered album, Glasper notes that “we were not allowed to put it on the album – Prince didn’t really like people recording his music – but I feel now is a good time to let everyone hear it”. Dig it.