Tommie Potts: The fireman who lit the flame of traditional music 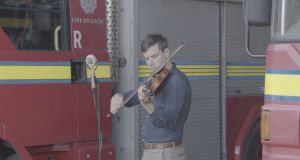 Training its lens on community and collaboration, this year’s Musictown festival, like countless other events, has gone virtual, with a raft of online performances taking place during the month of September. Dublin City Council and Aiken Promotions applied some blue sky thinking to this year’s programme, with works by Beethoven sidling up alongside a Donal Dineen DJ set for children and an inclusive dance premiere titled Places. At the heart of the mix is a project titled Tommie Potts: The Fireman Fiddler of the Coombe. Storyteller and historian Macdara Yeates will present a biographical concert film, celebrating Potts the man and musician, with fiddle players Liam O’Connor and Aoife Ní Bhriain, on site in the Fire Brigade Training Centre.

Tommie Potts was a fiddle player who left an immense legacy, and Yeates was eager to celebrate it in the heart of Potts’s own stomping ground, the Dublin Fire Brigade. The concert film will touch on key aspects of Potts’s life, including his involvement in a tragic accident in 1936 that saw three firemen lose their lives. Potts the fireman is an important lens through which to understand Potts the musician, Yeates believes.

“Tommie’s a figure who’s fascinated me for many years,” Yeates declares. “Too often we only know musicians as musicians. We have no knowledge of their personal lives or the fact that most of them have day jobs. Back then, people were known by their job because there was no such thing as a professional route for musicians. I find it just so amazing that someone with Tommie Potts’s imagination would still have had to have a normal job. I mean, how did he have the time to be a fireman?”

Potts was a fiddle player like no other. His music has been described as avant garde, and jazz-like in its improvisations. And even though dance was at the heart of Irish music, Potts was known primarily as a soloist, and his seminal 1972 album The Liffey Banks has given musicians, listeners and academics alike a rich bounty: the ultimate gift that keeps on giving.

“Tommie Potts utterly challenged the very nature of traditional Irish music, and what it meant to be a traditional Irish musician,” Yeates insists. “He did not go to a conservatory. He learned traditional music from his father in his front room in the Coombe, and became one of the most expressive, experimental artists with it. And that was pre-folk revival.

“He turned traditional Irish fiddle music into a creative, expansive, improvisatory art form. It should be said that there were other fiddle players who were bending the rhythms. Pádraig O’Keeffe [from Sliabh Luachra] and John Doherty [from Donegal] were really experimental fiddle players. But in Tommie’s case, the social dance music played for céilís didn’t seem to hold a whole lot of interest for him. He was interested in the solo art form: being free of rhythm, time and structure to create the most honest, expressive music that he possibly could, and that was unprecedented in his time.”

“I think Tommie Potts’s music is representative of a space at the artistic core of traditional music,” O’Connor suggests. “In essence, his fiddle playing was extremely creative and inventive while simultaneously being reflective of the deeply rooted tradition which he inherited through his family and cherished.

“You can hear traditional ornamentation executed to perfection – rolls, grace notes, slides, cuts, crans – all hallmarks of the piping, flute and fiddle pedigree to which he was born. He carefully developed his own arrangements of well-known tunes such as My Love Is in America that featured unusual variations that sounded spontaneous or improvised.

“I feel that he subtly bent rather than broke boundaries by extending existing modes in nuanced ways. His ornamentation being so traditional and familiar, it gave his ambitious melodic variations a grounding. He did this as a solo unaccompanied artist without stunts, props or tricks. Bare and raw.”

Potts the soloist is central to understanding his music, O’Connor believes.

“His music is almost entirely that of a solo artist. It is performed more for the listener than the dancer,” he notes. “It is intense and always demanding. He physically stood alone as a soloist in communal informal sessions. His music stands alone in terms of the intensity of emotional outpouring, particularly when playing slow airs. People recall witnessing Tommie crying while playing. Playing almost exclusively as a soloist must have a carried some social challenges as he was standing out from the crowd in a literal and an artistic sense. I think he had a deep reservoir of emotion and a deep understanding of traditional music which, when combined with his innate talent, creative and artistic temperament, equipped him to put a stamp on the most hackneyed of tunes, turning them into something profoundly imaginative.”

Aoife Ní Bhriain is a classical violinist and a traditional fiddle player. She has been enormously influenced by Potts’s music.

“Tommie Potts is the Alice in Wonderland or Narnia of my musical life,” she declares. “His music breaks all the rules while keeping such respect for the tradition and even more so a respect for the music, his music. This discovery as a teenager taught me how to listen, to bend the rules and to not be afraid of having my own personal relationship with music, any music.

“I can’t say I’ve always had the confidence to pull it off, but knowing that it exists and that Tommie Potts had that ability to channel himself through the music in that way, it makes everything seem possible. Tommie Potts has not only been an inspirational figure for me. He’s also been a mentor, which is a strange thing to say for a man I’ll unfortunately never get to meet.”