This Is How We Fly: a gravity-defying Irish-Swedish adventure

This Is How We Fly fuse traditional music from Ireland and Sweden with elements of Appalachian clog dancing, jazz and electronica. They look set to take off 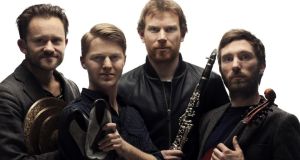 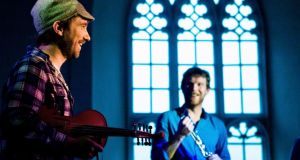 There’s a telling moment in film-maker Myles O’Reilly’s atmospheric film about This Is How We Fly’s trip to Sweden last year to record their debut album. Fiddler Caoimhín Ó Raghallaigh and percussionist Petter Berndalen are walking through downtown Stockholm talking about the band’s unusual name and how it relates to their sound.

“I can feel in the music,” says the Swedish percussionist, “that we are levitating, all of us. It feels like we are flying.”

“Yes,” agrees the fiddler from Dublin, “The way you play, it feels very related to physical movement. Rather than clock time or metronome time, it’s gravity time.”

Berndalen, with his improvised kit of drums, tambourines and bells, and Ó Raghallaigh with his customised 10-string Scandinavian fiddle, are two-quarters of this high-flying new group that fuses traditional music from Ireland and Sweden with elements of Appalachian clog dancing, contemporary jazz and ambient electronica. The quartet is completed by Dublin reed player Seán Mac Erlaine, best known for his experiments with sound processing in a jazz context, and Michigan-born “percussive dancer” Nic Gareiss, who uses his dancing shoes and a small wooden stage to turn the vocabulary of various dance traditions into musical rhythms.

It’s a melting pot of styles, at once ancient and avant garde, which has won This Is How We Fly a strong following in the short time they have been together.

It was never meant to last. Róise Goan, outgoing director of the Dublin Fringe Festival, simply asked Ó Raghallaigh to put something together for the festival in 2010. “She said she wanted something that no one had ever heard before,” says the fiddler, “so I rang up the three lads and asked them if they would be interested in doing a one-off gig. They were all people I had wanted to work with, and I felt it would be an interesting combination, but I don’t think I expected us to do more than one concert.”

That concert, in Dublin’s Grand Social in September 2010, was packed to the rafters, and the audience’s response to this new, gravity-defying hybrid was positive.

“That’s when we knew we were on to something,” says Mac Erlaine. “And it’s pretty much been like that every time since. It’s very much a live band, particularly with the dancing. There’s a strong visual element, and people say that we look like we’re having a really good time on stage. So we try to project that out into the room, and hopefully we get the same thing back, and then the level of the experience escalates for everyone.”

For all the high-tech sound processing coming from Mac Erlaine’s laptop, the group’s sound is firmly rooted in tradition, thanks to Ó Raghallaigh’s mastery of the Irish fiddle tradition, which he found was enhanced when he discovered the Norwegian Hardanger fiddle.

“I remember the first time I heard it,” says Ó Raghallaigh, who now plays his 10-string instrument with Irish supergroup The Gloaming as well as This Is How We Fly. “To me it was a very similar experience to hearing Tommy Potts for the first time, where you’re absolutely flattened by the music. It kind of came sideways at you, so wild and beautiful and unexpected. I would have heard a hell of a lot of music, but this was something completely different coming from Norway. ”

A musical re-education
For Mac Erlaine, the discovery of the Irish tradition was part of a gradual process of re-education that began when he met the fiddler.

“It seemed like everything I knew about music up to that point was from somewhere else,” says the jazz musician. “I guess America was at the root of it. As a saxophone player, you’re checking out people like Coltrane and Ornette Coleman, and they are making music out of a very distinct situation that they were in, as black musicians in 1960s America. It’s fantastic, amazing music, but at a certain point, you start asking yourself: where does someone like me fit in with that kind of scene?

“It sounds like a stupidly obvious thing to say, but the thing about Irish music is: I’m Irish. There was a parallel world of music happening around me already that I didn’t really know anything about.”

The group’s debut album – which they launch this week with a series of concerts, including the opening night of the Bottlenote festival in Dublin’s Button Factory on Friday – is the exciting sound of new music taking shape, of four fearless musicians spreading their wings.

It’s a haunting set of tunes – some traditional, some composed by members of the group – that proves the continuing vitality of Irish traditional music.

Ignore the genre police
As always, there will be a minority who rail against what they see as a dilution of that tradition, but This Is How We Fly are ample proof that whether it is Irish, Swedish or Appalachian, traditional music is robust enough to meet other genres on an equal footing.

The genre police may be waiting in the long grass with an indictment for daring to perform unnatural sonic experiments, but one suspects that This Is How We Fly are just about to take off.

Bottlenote: Festival highlights
This Is How We Fly’s Seán Mac Erlaine is one of the founding members of Bottlenote, a collective of Dublin improvisers whose annual showcase takes place this weekend.

The festival opens on Friday night with a special performance by This Is How We Fly in the Button Factory in Dublin’s Temple Bar. Admission is €15 and includes a copy of the group’s new CD.

Then, on Saturday night, the group will be joined by the other founding members of Bottlenote: guitarist Shane Latimer, whose OKO recently represented Ireland at the 12 Points Festival; and keyboard wizard Justin Carroll, who flies in from his current base in Brooklyn for The Walls Have Ears, a unique musical happening in the haunted surroundings of 13 North Great George’s Street. Admission is by pre-booked ticket only, and guests will be conducted from room to room, where the musicians will be performing solo sets with one ear cocked to what is happening elsewhere in the house.

What is Houseparty, the app everyone’s talking about – and not in a good way?
5 Miracle warnings and a lack of bull
6