These ‘weirdest ever’ lyrics are really nothing to freak out about

A new poll of the weirdest song lyrics ever includes songs by The Killers, The Beatles and Black Eyed Peas, but read between the lines and they’re not so strange 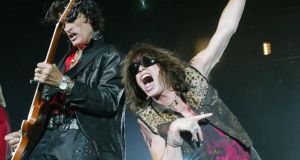 A new poll by a music streaming service has detailed the “weirdest ever song lyrics”. The funny thing is, there’s nothing weird about any of their top 10 choices. There are some (unintentionally) Dadaesque lyrics out there in the popular music canon – see Aerosmith’s song Pink, which contains the stunning apercu: “Pink, it’s like red but not quite” – but none of them feature in this new monster raving loony rock lyric poll.

For the Blinkbox streaming service, the weirdest song lyric in the world is the “Are we human or are we dancer?” line from The Killers’ Human. This is actually a re-working of a Hunter S Thompson quote wherein “dancer” is being used as a category of being, as a parallel to “human”. The division referred to is simply being used in a rhetorical sense. It’s not weird at all.

The second weirdest lyric ever is from The Beatles’ I Am The Walrus: “I am the eggman, they are the eggmen, I am the walrus, goo goo g’joob”. First, this was recorded in 1967 when The Beatles were doing a lot of drugs; second, it’s a matter of public record that Lennon deliberately wrote these lyrics as a joke, to annoy critics who were constantly analysing the band’s work.

Even the classic weird lyric songs are omitted here. These include Jimmy Webb’s MacArthur Park: “Someone left a cake out in the rain; I don’t think that I can take it, because I took too long to bake it, and I’ll never have that recipe again”. That’s proper weird. As is Neil Diamond’s “I am, I said, to no one there, and no one heard at all, not even the chair”.

There’s a big difference between lyrics that have been hastily assembled to meet a recording deadline and the demented doggerel emanating from songwriters labouring under the illusion that they are the poets of their generation.

Take the big Coldplay hit Yellow, named after the Yellow Pages. Chris Martin needed a word to fill in the blanks on the song and the first thing he saw in the studio was a copy of said directory. Not that this stops Coldplay fans pondering about the meaning of yellow in the song.

Des’ree’s number one song from 1998, Life, has the immortal lines: “I don’t want to see a ghost, It’s the sight that I fear most, I’d rather have a piece of toast, watch the evening news”. That’s somebody scribbling down the first thought that comes into their head in order to make closing time at the pub.

And don’t forget an utter lack of literary ability. On Duran Duran’s Is There Something I Should Know, they decided to go for a simile. They came up with “Don’t say you are easy on me because you’re about as easy as a nuclear war”. People have been stoned to death for less.

Top of the pops, though, is the clever reversal technique, as employed by Johnny Borrell on Razorlight’s Somewhere Else: “And I met a girl. She asked me my name. I told her what it was.” Genius.