The voice of experience: sean nós made new for Iarla Ó Lionáird 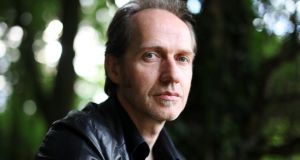 Iarla Ó Lionáird: ‘I’m beginning to understand that the goal really is to create experiences for the listener and for myself.’ Photograph: Feargal Ward

Remoulding songs from our sean nós tradition is a bold move, and not one to be taken lightly, unless the adventurer has a suit of armour to protect himself from the slings and arrows of those on intimate terms with the music.

Iarla Ó Lionáird has chosen to do just that in his latest project, Iomas – Intuition. It is time, he figures, to revisit some of the sean nós songs that have formed the backbone of his repertoire, by bringing them to the attention of a group of contemporary composers to whom he has given carte blanche to make them their own. David Lang, Nico Muhly, Dan Trueman and Niall Vallely are among the composers and arrangers charged with this task.

Anyone familiar with the sound of the Norwegian Hardanger fiddle – through the playing of Caoimhín Ó Raghallaigh, for example – will be aware that that billowing, high, lonesome sound envelops a tune like no other. Trueman, a US composer and arranger, first introduced the Hardanger fiddle to Irish music through his friendship with Ó Raghallaigh. At Ó Lionáird’s request, Trueman has created arrangements for three sean nós songs, including Siúl a Rún.

“The songs themselves are so beautiful that, quite frankly, at the outset I was concerned about doing more harm than good,” Trueman says. “I wanted to make sure that I wasn’t lessening the song. This project has allowed me to get to know Iarla’s voice in real detail, and try to deal with it musically on my own terms.”

Trueman has set aside the ornamentations of the Hardanger, concentrating instead on creating a sonic landscape for a concert orchestra that will coalesce with Ó Lionáird’s cavernous voice. The pair plan to collaborate again in the future.

“Most of Iarla’s songs are not in clear metres,” Trueman says, “so one of the challenges is to find a way to play with him without changing him so that he’d have to square everything up and make it less natural, less of the breath and of the word. To me, the Hardanger fiddle, with its very flexible sense of time, felt like a natural place from which to approach Iarla’s music.”

There’s a serendipity underscoring many of the pairings that Ó Lionáird has curated for this concert. He has sought out Donnacha Dennehy of Crash Ensemble, whose 2011 Grá agus Bás drew its inspiration from Ó Lionáird’s voice and from the sean nós song Aisling Gheal. Dennehy has arranged Aisling Gheal for this performance. He describes working with Ó Lionáird as “the truest collaboration of my life so far”.

“It simply reaches some very emotional place inside me,” Dennehy says of sean nós singing. “It probes deeply, and to some extent that is unexplainable. However, it is also pregnant with possibility for me as a composer. It intersects with my own musical language in a very fruitful and meaningful way. In a technical sense, I was inspired by how, harmonically, it related to lots of ideas I had about the way the harmonic series operates in my music. The words are also beautifully resonant. I wish that my Irish was better, but this tradition has spurred me on to learning more, often with the benign encouragement of Iarla.”

‘A duvet of harmony’
Nico Muhly is a contemporary classical composer and arranger whose resumé includes working with Björk, Antony and the Johnsons, Crash Ensemble, New York’s Metropolitan Opera and Glen Hansard. His approach to arranging two songs at Ó Lionáird’s suggestion (one of which is Eleanor Plunkett) was revealing in its simplicity, particularly since this is Muhly’s first time working with the Irish language.

“I always feel like making an arrangement is more like being asked to dress somebody,” Muhly says. “You don’t want to call attention to yourself; you want to make the person look great and have the clothes disappear, in a sense. My approach for these two songs was very, very simple: follow the chords and leave a sort of halo behind. Iarla’s voice is so severe in its expression; I wanted to make a duvet of harmony for him to rest in.”

Ó Lionáird is sanguine about these collaborations. “What I’ve been hearing is what I had hoped to hear,” he says, reflecting on the works in progress, “which is unique responses to the music, with tremendous personal insights from each of the composers. You know, more and more, I’m beginning to understand that the goal really is to create experiences for the listener and for myself. That’s what this is all about.”

Have you a moral duty to care for others?
10 An Irishman at a beheading
Real news has value SUBSCRIBE