The Unthanks: the light and the dark of English folk music

The group have been singing the canon for a decade – but what happens now that they are making their own music? 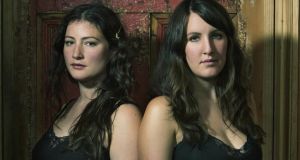 Rachel and Betty Unthank: ‘If you’re not going to put yourself out there, what’s the point in living?

Now that they’ve popularised traditional folk music among a younger generation, the next item on the Unthanks’ agenda? “Make clog dancing cool.”

All right, that’s not entirely true, but Becky Unthank cackles with laughter at the idea.

“When I was at school, I used to just not tell anyone I was a folk singer because I thought I might get picked on,” she says. “And I didn’t tell them I went to clog class every Friday, either. God, no. No, no.”

Then again, stranger things have happened – like the Northumberland band (Becky, her sister Rachel, Rachel’s husband Adrian McNally, and friends Chris Price and Niopha Keegan) becoming one of England’s most celebrated folk acts over the past 10 years. In fact, stranger things have happened to The Unthanks themselves, such as having Bilbo Baggins proclaim his love for the group.

“Adrian just said to us, ‘Oh, I’ve had an email from Martin Freeman telling us that he likes us and he listened to our music when he was filming away,’ ” says Becky. “We were like, what, The Hobbit? It was a shock. You forget that these people are real people who listen to music like everyone else, don’t you?”

Music was in the Unthanks’ blood, thanks to their father, George, who remains active on the folk music scene in Northumberland. With Becky studying art history at university, and Rachel teaching music in schools, taking things to the next level happened almost accidentally.

“It started off with us trying to get a free ticket to a folk festival,” says Becky. “That was literally our big hope: that if we sang a few songs, they’d give us a ticket for free. Then we met Adrian, and he encouraged us to have dreams other than getting a free ticket to a folk festival. It’s just been really organic development. We’re just still experimenting and exploring.”

After releasing a number of well-received studio albums, they embarked on their Diversions series, beginning with themed shows consisting of Robert Wyatt and Antony and the Johnsons covers, which they later committed to record.

“We’ve got a list a mile long of other Diversions we’ll do, whether that’ll be collaborations or maybe individual solo albums within the band,” says Becky. “We want to do a winter album [and] we want to do a children’s album, so there’s certainly lots of different projects on the cards.”

“We’ve been a bit brave and tried to write a few ourselves, which is quite a departure. I suppose it is a risk, but my song Flutter is on the album. It’s not really anything like our other songs. Eventually I thought, if you’re not going to put yourself out there, what’s the point in living? You might as well be brave and explore.”

Beth happened across album track Hawthorn – originally a poem by Cornish poet Charles Causley – almost by accident during her time living in Manchester.

“I think the best way to collect songs is to pick them up everywhere. I started a singing session in a pub there with a couple of friends, and I found a song there. As soon as this man started singing the first line, I thought, ‘That is a special song, I really want to sing it’, before he’d even finished.”

The band recorded the album in their own studio for the first time. It’s an old granary building near where Rachel and Adrian live in rural Northumberland. “[They] live next to a farmer, and they just asked if they had any spare room. At first it was just used for storage, and Adrian spotted that it would work for a studio set-up. It’s nice to be in the countryside and to be inspired by that when recording.”

The grounded nature of the band means they can do play huge festivals, go to the Mercury Music Prize ceremony and travel to Ethiopia as part of Damon Albarn’s Africa Express project but they can also come back to their hometown and sing in a corner of the pub without any fuss.

“I think, however successful we got, we’d still always do those things, because they’re a big part of our life.”

Given the fact that Mount the Air, as beautiful as it is, is not quite an album of pick-me-ups, aren’t they bothered by the ‘miserable bugger’ tag (as the Guardian put it)? She throws her head back and laughs loudly.

“We’re actually not miserable people at all; we’re ridiculously lighthearted people, but we love melancholy music and dark stories,” she says, grinning. “But I’m not ashamed of that. A lot of it has to do with being in the folk genre as well; it’s music of the people, really, and people sing about their lives.

“It’s a form of therapy, isn’t it? You have to let your emotion out somehow, whether you cry, or laugh or whatever. I think singing soothes the soul. It does for us, anyway.”

Mount the Air is out now. The Unthanks play the National Concert Hall on March 12th