The New York Philharmonic introduce Dublin to the daughter of chaos

The orchestra’s appearance at the NCH kept things contemporary, unorthodox and sensual 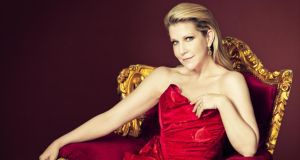 Mezzo-soprano Joyce DiDonato sang with a kind of effortless aplomb, as if singing of beauty and precision were something that could just be made to happen

The New York Philharmonic’s appearance at the National Concert Hall on Thursday was anything but orthodox for a visiting orchestra. There was no big concerto or symphony, and the opening work was a contemporary piece called Nyx, which was first heard in Paris in 2011. It’s by Esa-Pekka Salonen, who becomes the philharmonic’s composer-in-residence later this year.

These days Salonen is best known as a conductor, particularly for his long period (1992-2009) with the Los Angeles Philharmonic. But he has a composing career that runs in parallel with his conducting, and one of the reasons he stepped down as music director in LA was to devote more time to composition, which he seems to regard as his primary calling.

Nyx, in Greek mythology, is the daughter of Chaos and the female personification of the night. Salonen didn’t set out to create a musical depiction of her, but says “the almost constant flickering and rapid changing of textures and moods as well as a certain elusive character of many musical gestures may well be related to the subject”.

The piece is sonically gorgeous, comfortable rather than unsettling, a lot more glamorous in gestural style than Salonen seems to suggest, and always beautifully tailored in its instrumentation. Alan Gilbert and his players conveyed it as a kind of luxuriant undergrowth, lit so that every element, large or small – the score features lots of solos – could be kept in focus.

The same attention to the finest of details informed the sophisticated orientalism of Ravel’s languorous, florid, haunting Shéhérazade. Mezzo-soprano Joyce DiDonato sang with a kind of effortless aplomb, as if singing of beauty and precision were something that could just be made to happen. It was the kind of performance that never seemed to come at you, but rather drew you in to its exceptional intimacy, like some of the best performances of chamber music.

Sensuality ruled in the second half, too, although the understatement of Gilbert’s approach didn’t seem quite right for Ravel’s Valses nobles et sentimentales, and he didn’t quite manage to unlock the magic that is contained in Richard Strauss’s Rosenkavalier Suite.

There were encores at the end of each half of the concert: DiDonato was heartstopping in Strauss’s Morgen! and, at the very end, a group of brass players stole the show with some no-holds-barred rollicking while their colleagues sat and looked on in silent admiration.

There was some superb playing, too, at the RTÉ National Symphony Orchestra’s concert under David Brophy the following night. Julian Bliss was the soloist in the Clarinet Concerto by Carl Nielsen, a work that has a rogue presence in the orchestra: a side-drum that functions as a sometimes disruptive commentator. There’s an unpredictable, unbridled character to the clarinet writing, which Bliss exploited with energy, wit and compassion.

The purely orchestral items in this Nordic programme, Grieg’s Peer Gynt Suite and Sibelius’s First Symphony, were delivered with firmness, deliberation and thrust, but also with lack of light and shade, so that the bluntness sometimes came to seem unrelieved.

The programme for June’s KBC Great Music in Irish Houses Festival has been announced, and the festival continues to stretch the boundaries of what is to be considered a “house”. This year the embrace covers TCD’s Samuel Beckett Theatre, as un-house-like a place as I can imagine, one of the all-too-familiar breed of black box theatre spaces that have proliferated in Ireland in recent decades.

The festival opens at the theatre on Tuesday, June 9th. It is the same venue where the Crash Ensemble gave its first concert, and the KBC programme there is one that Crash would be happy to have devised itself. The Colin Currie Group will play Steve Reich’s Music for Pieces of Wood (1973), Sextet (1985), Mallet Quartet (2009), and the quartet for two vibraphones and two pianos that was written for them and premiered by them in London last year.

At the other end of the festival is a Dublin Musical Saunter, on June 14th, celebrating the 150th anniversary of WB Yeats’s birth with soprano Deirdre Moynihan at the Hugh Lane Gallery, Robin Tritschler at the National Concert Hall, the Soundweave duo at the Dublin Writers’ Museum and soprano Lynda Lee at the Chapel Royal, Dublin Castle.

The Scottish Ensemble Marsyas and their Irish director, Peter Whelan, are involved in another event, presented in association with the festival at the Chapel Royal at lunchtime on Friday 12th. It’s a performance of The Universal Applause of Mount Parnassus, a serenata da camera by Johann Sigismond Cousser (1660-1727), also known as Kusser, a pupil of Lully who worked in Dublin from 1707. The serenata was written for performance at Dublin Castle in 1711, five years before the composer was appointed master of the musick, attending his majesty’s state in Ireland.

I have to thank Peter Whelan for drawing my attention to the fact that Cousser’s commonplace book is available as a free PDF download from Yale University. It’s a kind of 18th-century Enquire Within Upon Everything from the perspective of an active professional musician.

As Whelan put it to me: “You can see names and addresses of musicians and instrument makers in Dublin as well as ferry times to Chester and cures for toothache and hangovers.”

Yale summarises it this way: “ In several languages, chiefly containing musical material. Contents include: recipes and remedies, poems, an alphabetical list of the people known to Kusser, lists of various kinds of music, lists of tunings of various instruments, instructions for the preparation of a copper plate for engraving, two puzzle-counterpoints devised by Kusser, songs, a short treatise on the enharmonic scale, a tabulation of drum rhythms, a treatise on flute-playing, a long treatise on counterpoint, systems for bringing a spinet into equal temperament, notes on the cost of putting on a concert in Dublin, the registration of the organ at Trinity College Dublin, and a list of 33 directions ‘What a virtuoso who comes to London should observe’.”

It’s a treasure trove of unusual material, trivial and profound. It’s not just in the era of mobile phones that people started carrying chunks of their lives around in their pockets.