The music scene in 1916: noise, jazz and John McCormack

That was the scene internationally, but what would a Dublin music lover have had to choose from? 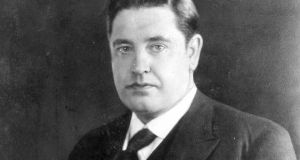 The best-known Irish musical name was that of tenor John McCormack (above), who abandoned the opera house in favour of a concert career

We’re in 2016, and the subject of 1916 is going to be with us for the duration, although the scars in Dublin seem minor compared with the war that was raging in Europe a century ago, where the year’s casualties could be counted in the millions.

Musically, Europe was in an ongoing ferment. Schoenberg, Stravinsky and Strauss had all shocked conservative listeners with their embrace of dissonance. The futurists had explored noise as a form of music. In the US, Henry Cowell, whose father was Irish, had created clusters by playing the piano with his forearm, and the musical meaning of the word “jazz” was gaining currency. And in 1916 the ballet Parade, with music by Satie, and involving Picasso, Cocteau and Massine, created a stir by having a typewriter in the orchestra.

The year’s big operatic opening was the second version of Strauss’s Ariadne auf Naxos. Prokofiev was at work on his Classical Symphony, Rachmaninov on his Études-Tableaux. Nielsen’s Fourth Symphony (The Inextinguishable), Falla’s Nights in the Gardens of Spain and Debussy’s Sonata for flute, viola and harp were all heard for the first time.

Irish composers had successes on both sides of the Atlantic. Charles Villiers Stanford’s opera The Critic or An Opera Rehearsed was seen in London and Manchester. And New York-based Victor Herbert wrote one of the first original orchestral feature film scores, for Thomas Dixon jnr’s The Fall of a Nation, a sequel to DW Griffith’s The Birth of a Nation.

The best-known Irish musical name was that of tenor John McCormack, who abandoned the opera house in favour of a concert career that would take him around the globe.

But what was happening here at home? What would a Dublin music lover have had to choose from in January 1916? There was no National Concert Hall, no national symphony or chamber orchestra or choir, no Music Network. There were no specialist supports such as the Contemporary Music Centre or the Association of Irish Choirs.

But The Irish Times of Monday, January 3rd, 1916, carries a review of an orchestral concert at the Antient Concert Rooms on Great Brunswick Street (today’s Pearse Street), a building that began life as the premises of the Dublin Oil Gas Light Company, which was turned to musical use in the 1840s and became a cinema in the 1920s.

The concert was part of a series conducted by WS Nabarro that focused on orchestral music that is now largely forgotten. However, the previews in the paper’s Platform and Stage column detail extended excerpts from operas that are still with us, with the singers also offering popular songs to piano accompaniment.

The climax of the first programme was a selection from Wagner’s Lohengrin, which was preceded by Gillet’s Loin du bal, Rosse’s Merchant of Venice Suite (music well enough regarded to be recorded by John Barbirolli in 1929) and the Scherzettino from Delibes’s Sylvia.

The following week the operatic focus was on Verdi’s La Traviata and Puccini’s La Bohème, with an Elgar March, the Overture to Thomas’s Raymond, Arthur H Wood’s Three Old Dances, and a new suite by Vincent O’Brien, who was the conductor of the Palestrina Choir and later Our Lady’s Choral Society, and also the teacher of John McCormack and James Joyce.

The next week’s highlight was orchestral rather than operatic, a “Fantasia on the works of Grieg” (no composer or arranger named) and there was also a selection from Donizetti’s Lucia di Lammermoor along with the March from Weber’s Preciosa, Reissiger’s Yelva Overture, Julian Jones’s Die Schmetterlinge Suite, Stanford’s Caoine, a Hungarian Dance by Brahms, Byng’s Tarantella, and Dvorak’s Humoresque.

The month’s final concert featured Partridge’s Souvenir de Russe, the Overture to Thomas’s Le Caïd, Hubert Rooney (teacher of Veronica Dunne) conducting the Prelude and Fairy Ballet from his Slumberland, Wieniawski’s Polonaise Brillante, Byng’s A Day in Naples, orchestral arrangements of some Mendelssohn Songs Without Words and the slow movement from a Beethoven piano sonata, and Auguste van Biene’s The Broken Melody.

The paper also carried an announcement about five “drawingroom concerts and one dramatic performance”, organised in aid of the Fund for Blinded Soldiers, with the first taking place at 61 Fitzwilliam Square “by kind permission of Dr and Mrs Travers Smith”. And there was also a concert in the Round Room of the Mansion House in aid of the Clongowes Social Service Club.

Ten years ago you would have been hard pressed to track down recordings of the popular musical sweetmeats of 1916. Today, courtesy of YouTube, you can readily find much of the music in a range of guises, from historical recordings to piano arrangements, even to one played on a music box, complete with a video of the machine in operation.

For the kind of programmes we might encounter today there were the chamber concerts of the Royal Dublin Society, given in its lecture theatre on Kildare Street, today’s Dáil chamber. Here, the Motto Quartet played Schubert, Mozart and Borodin, and the Hans Wessely Quartet offered Mozart, Mendelssohn and Taneyev.

Coverage of films at the Rotunda in January 1916 included mention of the Keystone comedy Miss Fatty’s Seaside Lovers (“laughter from start to finish”) and ended with the observation that “Orchestral accompaniments by the Ladies’ String Band are a decided addition to the programme”. Then as now, it’s likely that more people heard music in cinema than in the concert hall. The big difference is that in 1916 cinema needed live musicians, too.