The lightness of Orfeo, and a little enlightenment from Finghin Collins 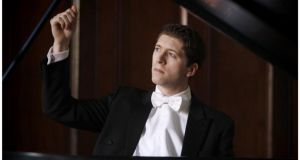 Finghin Collins: by some distance the most successful Irish pianist of his generation

It was an imaginative idea for Mark Duley’s Resurgam choir to team up with Erin Headley’s international early- music ensemble Atalante for the production of a mid-17th-century opera at St Nicholas’s Church during Galway Arts Festival.

The chosen opera, Luigi Rossi’s Orfeo, dates from 1647 and was commissioned by Cardinal Mazarin for performance in Paris. It was an extravagant affair. The cast runs to more than two dozen characters. There’s a prologue in praise of Louis XIV. The plot features a rival for Orfeo (Aristeo, a son of Bacchus), added to accommodate an important singer who needed to be included. And there is all sorts of extra comedy for light relief. A full performance with intervals would run to more than four hours. The Galway performance, scheduled to include 160 minutes of music, ran to nearly 3½.

The musical style requires lightness and agility of voice, and the two leads, mezzo soprano Lucia Cirillo’s Orfeo and soprano Nadine Balbeisi’s Euridice, were both nimble and emotionally penetrating. On the comic side, counter tenor Steve Dugardin’s Vecchia (Venus disguised as an old woman) had a bad night, with gaps in delivery that left him floundering in the absence of a prompter.

The high points of the evening, however, came in the ensembles and choruses, especially at the close of act two in the lamentation over the death of Euridice. It was as if Rossi here found a new and deep expressive vein. And here, too, the members of Resurgam, who were assigned smaller roles, really came into their own.

The second Dublin International Piano Festival and Summer Academy is under way at venues around the city. The core of the event is a series of masterclasses, all open to the public. The highest-profile events are recitals in the Hugh Lane Gallery and the National Concert Hall’s John Field Room. But the most unusual offering of the first weekend was a talk by Finghin Collins about developing a career as a concert pianist in Ireland.

Collins is by some distance the most successful Irish pianist of his generation, and was one of those players who seemed destined for the top from a very young age. His air of self-possession, and of possessing both the stage and his audience, marked him out from his peers. In his mid-teens, I watched him effectively wrest control of a concerto performance from a conductor. He just used his body in ways that the orchestra seemed to want to follow, and they went his way rather than the conductor’s.

He had his ups and downs on the international competition circuit before striking gold at the highly regarded Clara Haskil Competition in Switzerland in 1999.

He is now artistic director of the New Ross Piano Festival, and Music for Galway, and has, as his website puts, it, “a flourishing international career that takes him all over Europe, the US and the Far East”.

His presentation of the nuts-and-bolts issues of being a pianist was probably very sobering for the young hopefuls in his audience. There was no point, he told them, “pretending that practising is a lot of fun”. Practise everything “slower than you think is necessary”, he said, and he commended the idea of practising hands separately. He reminded me of the advice I was once given that there is always a speed at which you can play completely without error, and that’s the maximum speed you should practise at. It’s advice that is much harder to follow than to give.

He regurgitated advice he got at school, turning RTFQ into RTFS – “read the f***ing score” – although he mouthed rather than spoke the offensive word. In other words, don’t just play the notes, but pay attention to all the other instructions that composers have put in their scores.

He urged the students to understand the value of playing for people, explaining that the presence of listeners is a game changer. Being able to play something for yourself is entirely different to being able to perform it for someone else. Adrenalin makes sure of that.

He described competitions as “not very nice” and “very stressful”, and suggested that trying to second-guess a jury’s tastes and preferences would be a waste of time. Music-making of conviction should be the aim, and he said he could be drawn to performances he mightn’t actually agree with if the level of conviction is high enough.

He is the highest achiever among Irish pianists at the Dublin International Piano Competition, in which he made it to the semi-finals. But being on home territory made him extremely nervous, and it was “probably the most pressurised experience I ever had”.

Having made the semi-finals in Leeds and Dublin, he fared less well at the Paloma O’Shea competition in Santander, an experience that left him “definitely disillusioned”. He couldn’t equate the outcome with his own assessment of how he had played. And then, “as luck would have it”, he took the top prize in Switzerland.

It seemed as if the mention of luck was no accident. He understands that life is a bit of a lottery and musical careers, too. His job is to make the most of the opportunities that come his way. He issued cautions about being agreeable and professional, about being a good communicator, about replying to every email within 24 hours.

Clearly he has good reason to know that not everyone in the musical world takes proper care of their professional relationships. And he understands that he is a good fit for some of the non-musical challenges his chosen career involves. He likes travelling, meeting people, dealing with foreign languages and food.

He was pressed about favourite venues and repertoire. He mentioned the Royal Concertgebouw in Amsterdam, Symphony Hall in Birmingham, and the Wigmore Hall in London (“unbeatable for recitals”).

Ultimately, he sees himself as a musician rather than a pianist. His current musical obsession is operatic, Tchaikovsky’s Eugene Onegin, which he saw for the first time at the Glyndebourne Festival in May. His current piano favourite is Chopin’s Polonaise-Fantaisie, which he has just learned. And true to his own dictum of playing for other people, he ended his talk with a performance of it.

A fuller exposition of personal and professional togetherness you couldn’t have asked for.

Shots in the Dark: A portrait of Britain as a struggling team
6