The KLF return with a three-day blitz of Liverpool

Last week, the KLF broke 23 years of silence on why they burned a million pounds, and launched a new novel, band and funeral home 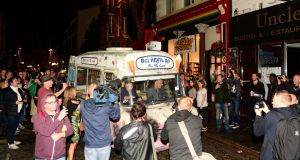 Bill Drummond and Jimmy Cauty arrive at the News from Nowhere Bookshop as the Justified Ancients of Mu Mu present Welcome To The Dark Ages last week in Liverpool. Photograph: Richard Martin-Roberts/Getty Images

Along with 399 other (mostly middle-aged, mostly male) ticket holders, I arrived in Liverpool on August 23rd with very little idea as to what I’d bought into. I had a ticket for a glorified book launch for the KLF/ Justified Ancients of Mu Mu (Jamms) novel 2023: A Trilogy. I had been told it would not include any music, live or otherwise, performed by the erstwhile biggest selling singles band of the early 1990s, and we were all going to be “volunteers” rather than an audience.

I have been working towards a documentary about Bill Drummond’s art for the past three years, so I wasn’t at all surprised with the approach. They are famously antipathetic towards their remarkable pop music history, and the book launch was in fact timed to coincide with the ending of a 23-year long moratorium, which they’d jointly signed, preventing them from speaking about the 1994 incident where they burned their entire musical earnings, totalling £1 million.

After signing in, everyone was presented with a wristband and a list of choices that would determine their activities over the following days. Flipping a coin, I ended up with two – singing – and was designated a role in the choir under original KLF arranger Nick Coley.

Day one ended with a remarkable, four-hour inquest into the money-burning. where luminaries such as Jeremy Deller offered their ideas of why it happened, witnesses including KLF roadie Gimpo gave first-person testimony, and the audience voted as to their verdict (the economist Ann Pettifor’s opinion, that it was part of a deep tradition of historical weirdness, won out).

I was too busy practising the backing vocals on Justified & Ancient with the choir to take part in day two, which involved Bill Drummond and Jimmy Cauty assigning each attendee a page from the book, then instructing each page-owner to join up with their fellows to form a chapter, and come up with an artistic response to the work by the end of the day. The results were spectacular, involving fire, whiskey, space operatics and an obscene re-writing of Feed The World, all taking place in the spectacular Bombed-Out Church AKA St Luke’s in Liverpool.

As all of this went on, none of the attendees as yet had any idea what was in store for them on the final day. However, the programme offered some clues, listing a funeral pyre, and among the jobs meted out were skull painters, gravediggers and coffin carriers. When it was announced that certain job-holders would have to have a health and safety waiver read out to them, the whole undertaking took on a frisson of impending doom.

Day three began in a converted Victorian boys’ home, the Florrie, where the choir were instructed to report for dress rehearsal and were given our yellow Jamm robes, for the full dress rehearsal. We were instructed not to tell anyone who the special guest vocalist taking Tammy Wynette’s role on Justified & Ancient was. But by now it’s common knowledge that Jarvis Cocker stepped into that part, and did a magnificent job, though his gravelly Sheffield tones were quite a departure from the original.

Our performance provided the climax to a presentation where the KLF announced that they had just opened a firm of undertakers and would be building a structure called the Peoples’ Pyramid, where subscribers could have their ashes formed into bricks and immortalised in a modern-day Mayan step pyramid.

The day ended with a three-mile procession behind the KLF’s ice cream van to a pyre in the shape of London landmark the Shard, which Drummond and Cauty, wearing their trademark forehead-horns, ignited. The debut performance of their manufactured band, Badger Kull, comprised of four of the volunteers, singing their only song – Toxteth Day Of The Dead – ended a remarkable and eye-opening three days.