The conductor who prefers to work with silence 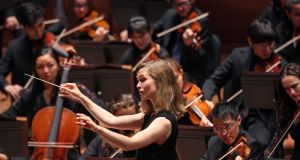 Mirga Grazinyte-Tyla: ‘I think that there is this incredible power of music to influence us and infect us’. Photograph: Hiroyuki Ito/Getty Images

When I first get through to Mirga Grazinyte-Tyla , she has just taken her seat on a rather noisy train carriage. “It’s a bit loud,” she cheerfully attests, “sorry”. The music director of the City of Birmingham Symphony Orchestra later describes the process of changing her name, specifically the “Tyla” she added herself some years ago.

Meaning “silence” in her native Lithuanian, she is reduced to quite ironically explaining this choice while making herself heard over a humming engine, her resolutely talkative fellow passengers, and something that sounds uncannily like bear traps being catapulted into a skip. “The name was actually just a rather childish thing,” she laughs. “The original idea was to choose a new one in the belief that a name always gives us some characteristic of that name.”

Despite all the noise on the train, the young conductor – my interview subject, not a passing train employee – remains resolutely unfazed and chipper throughout. I mention that the Australian composer Percy Grainger enjoyed rail travel so much that he would actually lay out manuscripts in his carriage and ostentatiously compose while the train was in motion. One can only presume the joy he took from this pursuit was truly great for it to have offset the near lethal assault of venomous eye-rolling to which he must have been subjected.

Grazinyte-Tyla does admit to being similarly infatuated. “Oh, I love it,” she chuckles as someone in the background nonchalantly chucks a suit of armour down a flight of stairs. “Trains, for me, are the best way to travel, definitely. After walking, I mean.” We’re talking in advance of a slightly longer trip the chipper Lithuanian will be making. On Thursday she will conduct a concert in the National Concert Hall with the City of Birmingham Symphony Orchestra as they perform three works that she says have a lot in common.

“One of the points which each of the three pieces shares very strongly,” she assures me, “is their cantability; their singing style. There’s so much singing music in Peteris Vasks who, as we know, came from the same Baltic tradition as I do, and vocal music is one of the big trends to life there. The same with Elgar and this incredible piece by him especially. The beginning of the first swinging melody his cello has when it comes in,” at mention of this she slips into a languid repetition of its swooning notes. “Its simplicity is striking for such a late work, it’s a masterpiece. And, Rachmaninov also, in his own way, so much of his work is singing. They are very different pieces though, at the same time.”

In conversation, Grazinyte-Tyla never drops the infectiously upbeat enthusiasm that has, to some extent, become her trademark. When first named Osborn music director of the CBSO just over a year ago, she was momentarily a cause célèbre for being a young, female conductor in a profession dominated by older men. Almost immediately, however, her incredible talent and striking character had reverted to being the only story in town.

That talent itself, of course, had never been in doubt, whether in her previous post as assistant conductor at the Los Angeles Philharmonic, or her still ongoing stewardship of the Landestheater in Salzburg. After the usual first-blush talk of broken ground and shattered ceilings, her well-worn skill and playful enthusiasm have made her name in Birmingham. Nowhere, perhaps, is this exuberance more evident than in the post-concert singsongs she has been known to host in her dressing room.

She laughs at their mention. “Well, there was one almost a year ago. We had a programme that we played in Birmingham and subsequently brought to the Proms. My parents and my brother came to listen and, yes, we all love to sing. So, during the intermission, as well as after the concert, we had a singalong moment, the whole lot of us.”

I wonder if rewarding a troupe of musicians for a good night’s work by giving them yet more musical labour is a risky gambit, but settle for simply asking if these events have become common. “Not every time, but I hope we’ll have a lot more similar experiences to try out. Our first tour ended in Hamburg, and we had a party with some Lithuanian dancers I’d invited.”

“It’s funny,” she exclaims “because, in a way, all the music, the greats of classical music, these great, complex scores, we could probably reduce them to those two origins; singing or dancing, practices which come from the most archaic needs of human beings.”

But how does one get such abstract ideas across to all the many moving parts that make up an orchestra? “Let me share with you a little quotation,” she says, “it’s from the Hungarian violinist and conductor Sándor Végh, who was once asked how he plays Mozart, to which he replied ‘I don’t play Mozart, Mozart plays me’.

“All of these players are individuals, with personalities, talents, ideas and brains that have had their own experiences. There is just this enormous potential and, definitely, the secret of a good conductor, to put it one way, is using this potential to finding ways to awaken in them the best they have, in a way that serves them best.

“I think that there is this incredible power of music to influence us and infect us,” she says, with a disarming sincerity. “We’re not just receiving the immediate emotions from these works, those things that come straight away to your ear, but also the codes the composers put into their songs, the ones you only get after endless research. One example is coming back to Beethoven’s symphonies and, again and again, finding within his music’s architecture; all of these ideas hidden everywhere. It not only enriches you, it really lets you grow.”

But before her carriage disappears into a tunnel in the English countryside, Mirga quickly adds that, in the end, these masterful hidden codes aren’t enough by themselves. “The most exciting point in fact for me is the combination or balance of those two things; the entreaties, or the immediate emotion so to speak, and then the rational and intelligent and brain-challenging stuff as well. That’s the sign of a real masterwork.”