US singer earned $170m in the last year, according to Forbes, more than twice as much as second-placed Adele 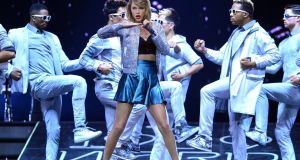 Taylor Swift has topped Forbes magazine’s list of the highest-earning female solo artists in music, with more than twice the income of the second-placed artist, Adele. The US business magazine estimated Swift earned $170m (€188 million) between June 1st 2015 and June 1st 2016, compared to Adele’s $80.5 million.

Forbes notes that most of Swift’s earnings came from her 1989 world tour, which sold more than $250 million worth of tickets, while Adele is unusual in that the bulk of her revenue came from album sales. Adele’s most recent album, 25 – which was released in November 2015 – became the fastest selling album of all time in the UK, selling 800,307 copies in its first week. In the US, it became the first album to sell more than 3m copies in a week, with 3.38m sales within seven days of release, and was the best selling album of 2015.

While Beyoncé seems low on the list, in fifth place, with $54 million, she is likely to be higher next year, when sales from her Formation world tour are taken into account.

Touring is the biggest generator of income for artists these days, and it’s noticeable that last year’s highest earner, Katy Perry, has slipped to sixth place. In 2015, her Prismatic world tour sent her to the top by generating $135 million. This year, without that cash machine, she earned $41 million.

The bottom four of the top 10, however, did not have to crisscross the world to make money. Jennifer Lopez, Britney Spears, Shania Twain and Celine Dion all took on lucrative residencies in Las Vegas, where casino owners shell out huge sums for marquee acts to draw in gamblers.

Forbes said the figures were calculated using information from Pollstar, which tracks tour revenues, Nielsen, which measures music sales, Recording Industry Association of America, as well as interviews with those involved in the inner workings of business.

New Irish Writing: A Little Cloud by A Joseph Black
8