After an eight-year hiatus, the trio were compelled back into the studio by a ‘mystical’ force 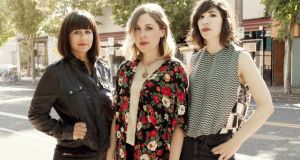 When Sleater-Kinney announced their reformation and new album last autumn after an eight-year hiatus, it was what you might call a pretty big deal. But Carrie Brownstein, one third of the band, is not one to get caught up in the kerfuffle. When we speak, she is in Los Angeles in the midst of the promo whirlwind that is accompanying No Cities to Love, their new album. Succinct, articulate and certainly not prone to hyperbole, she shrugs off the suggestion that the band’s comeback is momentous.

“It’s hard to assess that from the inside,” she says. “I don’t really think it’s for us to assess whether we’re role models or not; that’s for other people to say. But certainly when we announced the album, we were very flattered that there was so much enthusiasm and excitement.”

Despite her reticence, there’s no disputing that Sleater-Kinney were a vital cog in the 1990s and early 2000s rock scene, with their visceral, punchy brand of riot-girl-infused rock taking root in the Pacific northwest before quickly spreading outwards.

Formed in Olympia, Washington in 1994, the trio – Brownstein; co-guitarist and co-frontwoman Corin Tucker; and drummer Janet Weiss – enjoyed 12 years of success, releasing era-defining albums such as their eponymous debut, 2000’s All Hands on the Bad One and 2005’s The Woods, their last album before splitting in 2006.

“I think we were nearing a precarious point in engaging in both of those things; we weren’t able to enjoy it, we didn’t know where to go next creatively. It was a high point for the band when we put out The Woods because it exceeded and defied expectations of who we were as a band. In some ways, that made it a good time to go out.”

Brownstein has been far from idle in the intervening years. Most notably she co-wrote and starred in hit TV show Portlandia with Fred Armisen. “I wasn’t exactly sure what I was going to do after Sleater-Kinney,” she says. “I knew that I wanted to move forward and do something that allowed me to be considered in the present tense. I didn’t want the best, most creative years of my life to be behind me, but I wasn’t sure how that was going to manifest itself. I found a great friend and creative partner in Fred, and it really emulated the very organic process of Sleater-Kinney in that Portlandia was an extension of our friendship.

“It’s very rare, I think, in the world of television to actually get to work with someone that you’re friends with and bring something to fruition. We were very fortunate.”

Music bubbled just under the surface for all three members during their time away from Sleater-Kinney. Tucker released several solo albums, while Weiss drummed with Stephen Malkmus and The Jicks, Quasi, The Shins and other bands – as well as with Brownstein in the band Wild Flag, who released a well-received album in 2011. Still, there was no great thought put into her career map during that time.

“I think it was more that I wanted to play music and was ready to play music. I missed performing live on stage, I missed the chemistry of working with other musicians and writing songs. It was less about keeping my foot in the game and more just about needing and wanting it.”

She has also written her memoirs. Examining the past in such an intense way undoubtedly had an effect on her; she mentions the words “truth”, “transparency” and “vulnerability” in the same breath. Yet despite the trio’s crammed schedules, Brownstein says it was “an inevitability” that they would reunite.

“It’s almost as if it’s a force outside of ourselves, and once the machine gets back into motion, you just feel like you have to become part of it,” she says, chuckling. “It felt very mystical in that way, even though I’m not a mystical person, but it felt impossible to deny. Of course, in addition to that, there’s a lot of logistics and intention and hard work and labour, but it did just feel like the right time.”

When it came to writing new songs, she says that it was important to resist falling into old patterns. That sense of forward-thinking agitation is audible throughout No Cities to Love. Certain themes emerged during the sessions, but there was no harking back to the past lyrically, either.

“There was no reason to look back. We’re not really motivated by nostalgia, and I think we kind of knew what territory we had already covered. A lot of the songs on this album deal with power and powerlessness, infrastructures that people worship or that they feel alienated by, and how to define yourself on the periphery.”

Brownstein agrees that the landscape has shifted for the better in terms of women musicians. She mentions Perfect Pussy and White Lung, in particular, as young bands to admire. “There’s a real undeniability to the amount of women who are out there playing music of all different genres and styles. So it’s harder to diminish that, or to put things into male/female binary definitions. It feels like there’s a much more fluid definition of masculine and feminine. It seems like there’s a ton of women playing music, which is great.”

For now, she says. the band are just looking forward to getting out on the road. After that, there are no concrete plans, apart from her aforementioned memoirs being released this autumn.

“It’s about trying to be in the moment with it and not take it for granted. In the first incarnation of this band, we thought we were going to be around forever, and then we weren’t. So it’s good to just enjoy it while you can, and I think we’re all doing that. It’s been a lot of fun so far. We’re just going to focus on this tour and this year and we’ll see what happens next.”

Sleater-Kinney play Vicar Street, Dublin, on March 26th. No Cities to Love is out now