Ryan Adams: ‘There’s a lot of fight and a lot of light’

On new album Prisoner, Ryan Adams chronicles the private emotions behind his marriage split with Mandy Moore. ‘My life depended on making it,’ he says 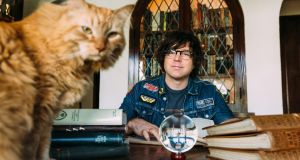 Ryan Adams: “Even during my most unhappy-sounding records, I might feel normal” 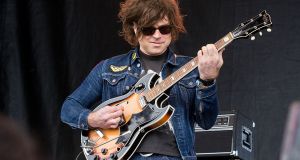 Ryan Adams: “I like to present my music less produced, with a raw take and maybe some layering.” Photograph: Suzi Pratt/WireImage

“I feel like I’m kinda back where I started. I’ve finally evolved into what I was when I first picked up the guitar, where I play without preconceived ideas,” says Ryan Adams. “I’m trying to learn the art of operating artistically without any fear. To just let it be what it is. That’s less distracting.”

He has just landed in London from Los Angeles and we are talking about his 16th studio album, Prisoner, in the lobby of a boutique hotel. The place is upmarket enough that we’re not disturbed, even though his sleeve of tattoos, Iron Maiden T-shirt and sideways-swept hair is one step short of a neon sign announcing his rock star status.

The point he makes is valid: the album indeed drops the expectation that has been built over his 22-year career. It doesn’t try to be too clever (as with his Taylor Swift cover album 1989) or surprising (as we saw with the metalfest of Orion). Instead, it’s like the end of a coming-of-age movie, proudly displaying the Ryan Adams we knew was there all along, the one that delivers heartfelt Americana loaded with meaning and melody.

He may have come full circle musically, but so much has changed. The 42-year-old now owns a studio in the Sunset Sound complex in Los Angeles; he’s teetotal, apart from marijuana to treat Ménière’s disease; and he has been elevated to headline status: he’ll be doing the duties at the Green Man Festival in Wales this summer, for instance.

In the three years since his last, un/self-titled studio album, the shift has been seismic, not least because his six-year marriage to singer/actor Mandy Moore broke down in a very public way. Moore has spoken in interviews about it, saying she feels “so much lighter”.

For his part, Adams chronicles the split on Prisoner, a true confessional album with tracks such as To Be Without You and Broken Anyway a revealing insight into the emotion behind the headlines.

“I didn’t think it would be fair to not include parts of me that I knew were painful, that would speak well in a song,” he says. “Given the type of musician and songwriter I am, it’s important to have something to say. It doesn’t mean you make stuff up or provoke things; for me, it means digging deeper.”

A prolific Instagrammer, he introduced To Be Without You by writing: “This record mattered more to me than any record before it and my life depended on making it. I would have died inside if I hadn’t.”

That’s quite the dramatic statement. “When people have traumatic or life-changing events in their life, it puts them in a funny place, and it’s difficult to process some of that stuff,” he says. “It can stay with you for a while. It can make a person bitter or angry.

“For me, I remember thinking, after six years of normalcy, even if it wasn’t what two people were looking for, in the end, you have to change. Even if it’s just the house you’re in. So making the record grounded me, because I had a place to go and work that out.

“It was also a place to remember what was great and romantic about things, because that’s also in the record. There’s a lot of fight and a lot of light seeping in. I hear it when I sing the lines; some are painful words to sing, and then I’ll get to a part that’s really positive to sing.”

Aside from the obvious focal point, the tone of the album was compounded by the deaths of Adams’s grandmother, who raised him, and of his childhood friend, Allen Midgett.

“It’s funny because they were neighbours,” he says, harking back to his hometown of Jacksonville, North Carolina. “It’s weird to look back on my place of origin and find that the main characters are gone. And at the same time, I’m getting older but I still have the same interests: comics, drawing, reading, pinball, heavy metal. So the album is also trying to describe the ache of missing them, but also talk about how I fit into that.”

Adams recorded 80 songs for the album, which were written partly on tour (Tightrope was written on the back of a tour bus after a painkiller-induced rush of inspiration) and completed in his former stomping ground of Electric Lady Studios in New York, with long-time collaborator Johnny T.

“The cuts that made the album were the first to third times they’d ever been played,” he says. “Johnny and I would jam, and then he would patiently wait while I finished off the lyrics. I recorded the live take of my vocal, guitar and drums together, and there’s no way to separate it; if there’s any ever a mistake or fluctuation, it’s not fixable.

“I like to present my music less produced, with a raw take and maybe some layering. I don’t like records that sound really immersed, that sound over-rich. I like space in records. And I like each part to feel that it’s meant to be there – if I take a hard left or right turn, it’s supposed to be there.”

But the urgency in which the melancholic songs presented themselves was no sign of his state of mind, he says.

“Even during my most unhappy-sounding records, I might feel normal. I’m not a miserablist – a word I learned in the Johnny Marr book [Set The Boy Free], in which he said everyone thought he was a miserablist when he was having the greatest time. It’s just in day-to-day life, there are things that people don’t talk about so they carry it as a burden; I’m one of those people, so I’ve always written records that try to dig into those bits.”

Has Mandy Moore heard the album? “I think I’ll leave that question, just because it’s too personal,” he says, with a hint of lament. “There’s a lot of other people involved. But I totally respect your reason for asking.”

The answer is not a surprise; the kindness that comes with it is, especially as the last time I saw him was for Other Voices 2007, where he appeared distinctly unempathetic about his onstage technical issues. But seven years on, he has nothing but good things to say about his Dingle experience.

“I think about it all the time,” he says. “I remember part of the drive was just so unbelievably beautiful. I really felt like I was living in folklore; you don’t know how green things can be until you get there.”

During the show, some technical problems seemed to throw him out. That didn’t muddy his memories? “I don’t remember that. Maybe there was feedback or something. That happens all the time,” he says. “It’s like if you work in an office, and you can’t get the copy machine to work. You’re not just going to go ‘that darn copy machine!’ after the 20th time. You’re going to be annoyed.

“I’ve asked my manager to go back to Other Voices, and we try, but I guess they do the logistics when they put together a tour and it doesn’t work out. But hopefully it will again,” he says, tantalisingly.

- Prisoner is out on February now on Pax Am/Universal