A beautiful and bewildering set of music, from an artist whose voice is in startling form 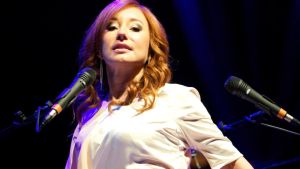 Perched between her piano and keyboard, Tori Amos looks as if she’s about to burst into a sprint - and if she did, no one would bat an eyelid, because Amos has never been one for predictability. In a career of more than 20 years, she’s taken more odd turns than a tourist in Venice - and here, at a solo show promoting an album that has yet to be released in Europe, she takes an intriguing journey through her formidable and bewildering back catalogue.

Amos’s songs don’t give up their secrets easily. They are deeply personal stories, with little shards and familiar fragments glinting through. Usually, these are leant epic, dark drama by Amos’s voice, here in pitch-perfect form, snapping through the icy top notes of her playing like footsteps through a fresh frost.

She opens with Parasol, soon followed by an elegant, gorgeous Cool on your Island, drawn from the days with her former band Y Kant Tori Read. Amos takes a staggered approach to Silent All These Years, bending its shape and staccato-ing its chorus; the effect draws off some of its momentum, but does little to burden the track’s beauty. And while she may not attack the song’s middle eighth with total intensity, the choruses are full, rich and deftly astonishing. Tear in Your Hand gets a similar treatment, and is a similar testament to her abilities.

Recent Amos concerts feature a Lizard Lounge covers segment, and here a version of Miley Cyrus’s Rooting for my Baby passes almost unnoticed. Soon, though, we’re back in Amos’s own strange country, with Purple People, Leather and a brooding, elegiac China. For the first time in the evening, she introduces a range of other textures and backing tracks, lending slick dynamic to the art pop of 16 Shades of Blue from her new album, Unrepentant Geraldines.

Throughout the concert, Amos’s voice and playing are startling, rich in tone and intensity, but she manages the strange trick of seeming to open her heart while holding her audience at arm’s length. There are sections here where the attention wanders, and the full, percussive force of a band is missed. When it clicks though, and for the fans throughout, it’s beautiful and bewildering, challenging and charming; and it’s a pleasure to see a true artist at work, from the perch of her prodigious powers.