Radiohead at Primavera Sound: A show of collective force

Radiohead deliver a masterclass in crowd control, before Kiasmos unload both electro barrels 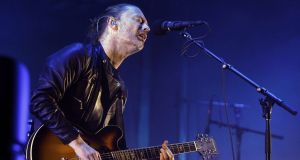 Next time a rioting mob needs quelling, don’t deploy the water-cannons - instead, roll in the Radiohead. Despite arriving 45 minutes early for the band’s festival set on the Heineken stage, there is not a hope of getting near to the stage, and yet even from this distance the band can reduce a crowd to total silence. Having battalions of fans who are happy to shush a festival crowd also helps.

Much has been made of Radiohead getting comfortable with their back catalogue on their latest tour, and the Radiohead rarities collectors will leave tonight with plenty of boxes ticked (Talk Show Host makes its wonderfully downbeat presence felt, with more surprises to come). But the majority of the tracks of course come from their most recent, excellent A Moon Shaped Pool. Opening with Burn the Witch before shifting gear to Daydreaming and Decks Dark, the band front load with their new material, displaying their phenomenal musicality with terrific assistance from Portishead drummer Clive Deamer on a second kit. The light show, three huge grid-screens, never focuses on individuals, instead sticking to smaller shots of everyone on stage. This is a show that’s entirely about the collective, professional musical effort.

With two hours to play with, the band are happy enough to slow-burn their way into the set, and there’s not much to suggest they worried too much about building or losing momentum while putting the setlist together. The sound is excellent in terms of detail but far too low throughout for a crowd of this size. (This seems to be a bit of a theme at Primavera, and may be related to restrictions from having a festival so close to the city centre.)

The most endlessly overanalysed frontman in the world Thom Yorke seems happy as a clam, but between songs there’s mostly silence as the band reset the template for the next favourite. There’s a lovely moment after Karma Police where the crowd continue to sing back the chorus and for a minute there the band almost, almost lose themselves and roll back into it.

The highlights are many and lucid. Weird Fishes is built up layer by layer into a tower of intricate melodies before stripping back to a whisper of a vocal and dropping into a bass groove that’s a mile deep. The little electronic glitch of Everything In Its Right Place gets a huge roar of approval, with some utterly fantastic looped vocal lines becoming a blur of sound and effect that’s tricky to find your way out of. Idioteque hums its odd electro ice age vibes with its rhythm stretched and made more London grimy.

There is a blistering Paranoid Android with guitar sounds that sound as fresh now as they did in 1997 before Bodysnatchers threatens to set the place on fire. A terrific 2 + 2 = 5 and set closer There There almost feels like a blues band taking a track for a walk just for pure musical enjoyment.

And then to confound all expectations, Radiohead come back on stage for a second encore and, after thanking the crowd, they unpack Creep in all its raw, angsty beautiful fury.

Other highlights on Friday including British singer Nao and her powerful performance, as she leads her cracking band through some of the best electro soul you’ll hear all weekend. Perhaps the death of Prince in April has sharpened awareness of just how influential his music is. But here it’s one part of a sound that seems hand-made in London. Expect her debut album in July to be a belter.

Putting in a decent shout for set of the festival so far are sublime Iceland act Kiasmos. Janus Rasmussen and Ólafur Arnalds make music that is sculpted into fine precise peaks with huge complexity in its hidden depths — oh, hang on, obvious iceberg metaphor dead ahead. It sounds straightforward but there are such textures in the lush techno compositions, and live they take full advantage of the depth in the tracks to create a euphoric set of music. It also helps that they take every opportunity to get out from behind the equipment and bounce the crowd along having as good a time as anyone at this outstanding show.

Much was being made of Avalanches playing their first live dates in 15 years at Primavera Sound. But during an uninspiring DJ set they do little more than cycle through songs, with little in the way of surprises, despite having the amphitheatre of the Rayban stage to play with. It’s a late-night misfire that doesn’t deliver, before Maceo Plex step up to the 4am plate and play Friday night’s Primavera Sound out in style.

The Guards: Inside the K – Policing in Ireland, but not as we know it
4