Alumni of Coláiste Stiofáin Naofa’s music, management and sound course include Mick Flannery and the Frank and Walters 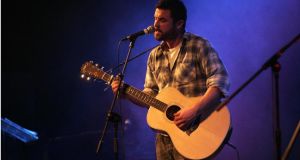 A Cork college that helped establish such artists as Mick Flannery, Sinéad Lohan and the Frank and Walters is tonight celebrating 25 years of its pioneering music course.

Coláiste Stiofáin Naofa (CSN) launched its music, management and sound course in 1990 under the guidance of teacher and member of Cork band The Stargazers, Chris Ahern.

Mr Ahern said: “It’s an incredible success story and our students have gone on to rewarding and fulfilling careers in their chosen area of music, thanks to the education and approach of the college.”

“Our students are given every opportunity to succeed and many of our music graduates have gone on to forge hugely successful careers with leading global record labels.”

Mr Ahern mentioned as an example the career of Mick Flannery, who wrote his debut album Evening Train while attending CSN, and who also found his sound engineer, Chloé Nagle, while at the college.

Mick Flannery is unable to attend tonight’s alumni gathering due to tour commitments in Germany, but he paid tribute to the staff at CSN for all the help they gave him.

“I had written some songs before I went to CSN - I had very few though that were finished, but they gave you free reign for your goals and mine was to write a whole concept album.

“They kept checking up on you so it was very good for me as far as writing - I’d say I’ve written more in the time I was there, compacted, than in any other two years,” he said.

Among the many other artists to graduate from CSN are members of bands such as O Emperor, The High Kings, Walking on Cars and Ten Past Seven, as well as singer-songwriter Áine Whelan.

CSN graduates have also worked with international stars such as Bryan Adams and Metallica. One such graduate is Jennifer Clarke, who is currently touring with Michael Bolton.

“When I started at CSN, I had an immense desire to make a career out of singing my own songs, but I didn’t know how to go about it,” she said.

“But the lecturers at CSN were all so dedicated and passionate, and my time at CSN reaffirmed my belief that anything is achievable.”