Phew, the Daft Punk album is superhuman after all

Their album was hyped, trashed and rehabilitated all within a month. Then it was released 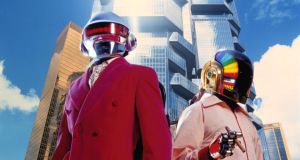 Daft Punk: the dance pioneers have managed to kick against the atrophy that has stymied so many others

Before the release of Daft Punk’s Random Access Memories , journalists in cities across the world were brought into a room, asked to hand over their phones, given a single run-through of the album and then released back into the world.

Once out, they tweeted. And their remarks, more or less, boiled down to this sentiment: “Don’t mean to spoil your excitement, but if you were expecting a banger of an album . . .”

That Daft Punk turned out to have the most-hyped, most-anticipated, most-discussed, fastest-selling, most-dismissed and then most-praised album of the year was something of a surprise on this side of the Atlantic. Sure, they had earned their place as music greats almost from the moment they released Da Funk , in 1995. That track was hard and relentless yet warm and joyous, and little in electro has quite matched it since.

They subsequently added a Spike Jonze video, featuring a man dog in a leg cast walking New York, that epitomised its brutal-sweet nature. It pretty much sealed the deal.

Yet the French duo, hidden behind their robot helmets for 15 years, seemed to have become yet more dance pioneers whose powers were on the wane. They were living on reputation, the mystery of their long-standing helmeted anonymity and the memory of visually awesome live shows (forged in a far more techno-innocent US market).

Other than that, their last proper album, eight years ago, was a straightforward affair; their soundtrack for Tron: Legacy wasn’t especially innovative. If Thomas Bangalter and Guy-Manuel de Homem-Christo – oh, such a name! – were not quite a spent force, and the filaments of their influence could be heard in so much modern music, they did appear to be drifting slowly from relevance.

Then the single Get Lucky was teased at California’s Coachella festival, via a sparkling, smile-inducing clip of Daft Punk, Nile Rodgers and Pharrell Williams as a four-piece.

At which point, and much to the surprise of many in this hemisphere, it turned out that a global demand for a Daft Punk album was bubbling away beneath the surface of popular culture: a simmering pool of hype and expectation ready to overflow. All it needed was for them to return with the song of the decade so far.

The Americans, it has been explained many times since, had their heads turned by Daft Punk’s Alive tour in 2006-7. So much so that the rest of the planet – which had long ago witnessed dance music’s journey from cultural game-changer and generational touchstone to middle-aged, detergent-selling mainstream acceptance – is now obliged to use the US-coined acronym EDM, for electronic dance music, in all and any articles about Daft Punk.

So Random Access Memories was then subject to a rapid cycle of hype, disappointment, backlash, appreciation and backlash against the backlash. Not all reviews were rapturous, with many holding to the original impression that the hype and expensive, star-studded production process were all smoke and mirrors and helmets that hid their ultimately mediocre prog-rock noodlings.

But in the week since its release it has become clear that Random Access Memories is not an album to dip a toe into but one to savour. It is best represented not by Get Lucky but by Touch , a song of almost ridiculous ambition that runs through several musical genres while building into something majestic and beautiful. It forms part of a middle section that clearly establishes Daft Punk as the geniuses that the hype promised them to be and that we dearly hoped they could back up.

But what is most remarkable about Daft Punk is that they have managed to kick against the atrophy that has stymied so many dance pioneers.

Kraftwerk are a (superb) heritage act now, the Rolling Stones of electronic music. Orbital recorded some decent tunes on their last album, but they’ve hardly evolved in 20 years. DJ Shadow ripped up music and put it back together in astonishing ways, then started reassembling it in increasingly awful ways. Underworld were behind the London Olympic opening ceremony, and their last album was very good, but that was largely because it treads comfortable territory.

The danger was that Daft Punk’s retrofuture image would become affixed to nothing but a classic-hits act, touring the festivals in an ever increasing bombast of laser shows and farewell gigs. Instead they’ve made something that sounds equally classic and fresh and that confounds the EDM straitjacket. They’ve looked backwards and forwards in equal measure and, in Random Access Memories , proved that dance pioneers don’t have to stay rooted to the spot.