Peter Green obituary: Fleetwood Mac founder and guitar pioneer who made the blues his own

The massively influential guitarist and songwriter was ahead of his time 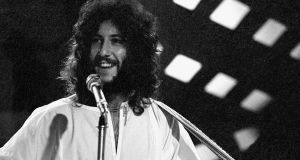 Peter Green: his aim was “to express as much as he could in the music, playing as few notes as possible”. Photograph: Ivan Keeman/Redferns)

Peter Green, who has died aged 73, was one of the guitar-playing greats of 1960s blues-rock as well as a gifted songwriter. He was the founder of Fleetwood Mac and although he was with the band for less than three years they became one of Britain’s leading acts during that time.

Their singles of that period, including the Green compositions Black Magic Woman, Albatross, Man of the World, Oh Well and The Green Manalishi, remain some of the most cherished releases of the era and the band was beginning to display major international potential by the time he quit in May 1970.

Then, apart from a burst of activity in the first half of the 1980s, Green went missing from action until the late 90s as he struggled with psychological problems seemingly caused by his use of psychedelic drugs. Some considered him a guitarist superior even to such rock’n’roll deities as Eric Clapton or Jimmy Page.

Noel Gallagher described him as “without question the best British blues guitarist ever”, while BB King said Green was “the only one who gave me the cold sweats”. John Mayall, leader of the Bluesbreakers, whom Peter played for before leaving to found Fleetwood Mac, said: “Peter in his prime in the 60s was just without equal.”

It was a track from the Bluesbreakers album A Hard Road (1967) that alerted Mayall to the breadth of Green’s abilities. The Supernatural was an instrumental piece written by Green on which he exploited various guitar tones and studio overdubbing techniques to create an atmosphere of mystery.

Green left later that year. Fleetwood Mac was named after a track he had recorded with the Bluesbreakers’ drummer Mick Fleetwood and bass player John McVie during some studio time Mayall had donated to Green. With a lineup of Green, Fleetwood, the guitarist Jeremy Spencer and bass player Bob Brunning, they made their debut at the Windsor jazz and blues festival in August 1967. McVie replaced Brunning after their first few gigs.

Once up and running, Fleetwood Mac were soon enjoying success. Their eponymous debut album was released in February 1968 and rose as high as No 4 in the course of spending 37 weeks on the UK album chart. It would eventually sell more than a million copies. Black Magic Woman reached the UK Top 40, but would become better known when Santana had a hit with it in 1970.

They released their second album, Mr Wonderful, in August 1968 and went on their first American tour; while hanging out with the Grateful Dead in San Francisco they declined to sample the LSD manufactured by the Dead’s supplier of bespoke psychedelics, Owsley Stanley. In December they were in New York at the start of a 30-date tour, and this time succumbed to Stanley’s product, which left them huddled in a hotel room enduring a collective bad trip.

In the same month, Albatross topped the British charts. The song was remarkable for its lilting, oceanic quality, largely created by Green’s dreamy arrangement of contrasting guitar parts, including those of the band’s recently added third guitarist, Danny Kirwan. An inspiration for the Beatles’ track Sun King and much admired by Pink Floyd’s guitarist David Gilmour, it sold a million copies, and added another 900,000 when reissued in 1973.

However, Green was in a troubled state of mind. He had begun to discuss his feelings of guilt at the band’s burgeoning earnings and wanted to give their money away (a sentiment not shared by his bandmates). Their single Man of the World was a thing of melancholy beauty, but its lyrics seemed to express Green’s desperate feelings – “there’s no one I’d rather be/ But I just wish that I’d never been born.”

Man of the World went to No 2 in the UK, while Oh Well was their first single to reach the US Hot 100. Growing success only seemed to worsen Green’s condition. Further touring in the US had seen his consumption of LSD increase, and he sampled more of Stanley’s concoctions when Fleetwood Mac supported the Grateful Dead in New Orleans. Green adopted a form of Buddhism-influenced Christianity, and began wearing white robes and a crucifix on stage.

He became obsessed with giving away money and on one occasion donated £12,000 to Save the Children after watching a TV news report about the famine in Biafra.

The crunch came when Fleetwood Mac reached Munich on a European tour in March 1970. Some wealthy German hippies took Green to their commune at a mansion outside the city, where he was plied with drugs and spent hours playing improvised music. He had to be extricated by Fleetwood and the band’s road crew. His bandmates and manager Clifford Davis felt that he was never the same afterwards.

Green left that May as his last single with them, The Green Manalishi, climbed to No 10 in the UK. Green had written the song after waking from a nightmare not long after the Munich experience, and its menacing, horror-movie tone seemed to speak vividly of his state of mind. The “Green Manalishi” was, he claimed, a metaphor for money: “The Green Manalishi is the wad of notes, the devil is green and he was after me.”

Born in Bethnal Green, east London, Peter was the son of Joe Greenbaum, a postman, and his wife, Anne. When Peter was 10, his brother Len gave him a guitar and taught him the chords of E, A and B7. He made rapid progress and became fixated on skiffle before gravitating to rock’n’roll and the blues of Muddy Waters and King. Hank Marvin of the Shadows became one of his favourite guitarists.

By the age of 15 he had dropped the “baum” from his surname, having been taunted for his Jewishness at school. His first job was as a bassist in a covers band, Bobby Dennis and the Dominoes, after which he joined the R&B band the Muskrats and then the Tridents. In the autumn of 1965 he played a few dates with the Bluesbreakers when he deputised for their guitarist Clapton, who had abruptly taken a holiday.

In 1966, Green was recruited as lead guitarist by Peter B’s Looners, whose drummer was Fleetwood. Then Clapton quit the Bluesbreakers permanently to form Cream, whereupon Green took over. He overcame early hostility from Clapton fans by the expressiveness of his playing, and earned the nickname “the Green God”.

After leaving Fleetwood Mac, whose rebuilt lineup featuring Stevie Nicks and Lindsey Buckingham would become one of the biggest acts in rock history, Green spent most of the 70s in a confused state, living on a kibbutz near Tel Aviv, then back in Britain taking such jobs as a hospital orderly and a cemetery gardener. He had no permanent home, but often stayed with friends or family.

Diagnosed as suffering from drug-induced schizophrenia, he underwent electroconvulsive therapy. In 1977, during a row over money with Davis, he made threats about using a shotgun. He was committed for treatment at a psychiatric hospital, and spent several months at the Priory clinic in south-west London.

He recovered sufficiently to get himself a record deal with PVK Records, where his brother Mike worked, and met the American fiddle player Jane Samuels, whom he married in 1978. They had a daughter, Rosebud, but divorced in 1979. Solo albums followed, with most of the songs written by Mike, and there was further sporadic work for the rest of the decade.

In the 1990s, Green was taken under the wing of Mich Reynolds, who had been married to Davis. With her brother Nigel Watson and the drummer Cozy Powell he formed the Peter Green Splinter Group, which released eight albums between 1997 and 2003. They played live regularly, Green intermittently showing flashes of his old brilliance. In 2009 he formed Peter Green and Friends.

Green was inducted into the Rock and Roll Hall of Fame in 1998 with Fleetwood Mac; at the ceremony he played Black Magic Woman with a fellow-inductee, Carlos Santana. In February this year, Fleetwood organised a tribute to Green at the London Palladium, where stars including Pete Townshend, Mayall, ZZ Top’s Billy Gibbons, Gilmour, Gallagher, Aerosmith’s Steven Tyler and Bill Wyman performed songs from Green’s career.

He is survived by Rosebud and by Liam Firlej, his son from another relationship. – Guardian

Dublin Fringe Festival 2020: Making lemonade in a year of lemons
8 A NUA WOMAN
9

O’Rahilly house at risk after being damaged by vandalism
10