Aaron Dessner produced, co-wrote much of Folklore with contribution from Justin Vernon 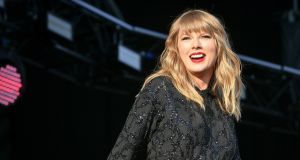 Taylor Swift: ‘Most of the things I had planned this summer didn’t end up happening, but there is something I hadn’t planned on that DID happen.’ Photograph: Ben Birchall/PA Wire

Taylor Swift has announced the surprise release of her eighth album, Folklore. The Grammy-winning songwriter produced and co-wrote much of the album alongside Aaron Dessner of The National.

Bon Iver’s Justin Vernon also appears on the record, alongside Taylor Swift’s regular collaborator, Jack Antonoff. It will premiere in the early hours of Friday, July 24th at about 5am Irish time.

Writing on Instagram, Swift said: “Most of the things I had planned this summer didn’t end up happening, but there is something I hadn’t planned on that DID happen.” She wrote and recorded the music in isolation, collaborating with “some musical heroes” remotely.

Surprise 🤗 Tonight at midnight I’ll be releasing my 8th studio album, folklore; an entire brand new album of songs I’ve poured all of my whims, dreams, fears, and musings into. Pre-order at https://t.co/zSHpnhUlLb pic.twitter.com/4ZVGy4l23b

In a statement posted on Twitter, Dessner said that Swift approached him in late April about writing together. He shared sketches that he had been working on with Swift, who sent him “a fully written version” of a song a few hours later. “The momentum never really stopped,” he wrote.

Said Dessner: “I’ve rarely been so inspired by someone and it’s still hard to believe this happened.” He detailed further collaborators on the record, including the National’s Bryce Dessner and Bryan Devendorf, and many of the band’s frequent collaborators, such as Ben Lanz, Thomas Bartlett and Kyle Resnick.

Swift wrote: “Before this year I probably would’ve overthought when to release this music at the ‘perfect’ time, but the times we’re living in keep reminding me that nothing is guaranteed. My gut is telling me that if you make something you love, you should just put it out into the world. That’s the side of uncertainty I can get on board with.”

Folklore follows Swift’s 2019 album, Lover. She was due to headline Glastonbury 2020 before it was cancelled because of the coronavirus pandemic.

It is not the only surprise album planned for release this week. Swift’s historic rival, Kanye West, has said he will release his new record, Donda: With Child, on Friday. - Guardian

Democracy for Sale: A plunge into murky waters
4

In a week of tributes to John Hume, a 12-year-old has the biggest impact
5