Paul Simon at 75: ‘The mind improves as you get older’

As he releases a new album, the acclaimed songwriter has little interest in his legacy – ‘Time takes care of that’ 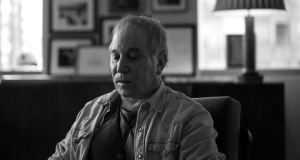 Paul Simon at his office in New York – despite having just turned 75, his creative output is showing no signs of slowing. Photograph: NYT 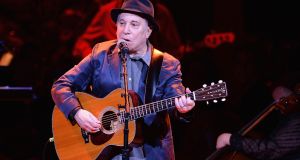 Paul Simon: “Most of the time I hear or read anything about my work I take exception to some portion of it, at least.” Photograph: Getty

The voice is slight yet unmistakable, but the mindset remains as firm, if not steely, as it has always been. Paul Simon recently celebrated his 75th birthday, but the songwriter – who in 2007 was the first recipient of the Library of Congress’s Gershwin Prize for Popular Song – is having none of the “elder statesman” discourse. This is understandable, given that his latest album, Stranger to Stranger, released a few months ago, has been described as “tenacious” (the Guardian), “potent” (LA Times) and, in this newspaper, “... elegant and often beautiful rendering of profound and searching inquiry into the ways of the world ...”

So, no, whatever you think, don’t start waving the bus pass at Paul Simon just yet. He really won’t take too kindly to it. “I don’t think age has anything to do with it,” he responds somewhat tartly to a question about age versus creativity. “It’s really about how you think ... I had many different ideas that coalesced into the new album, but there’s also a certain quality that has always gone into my albums, and that’s me.”

“In fairness,” he continues, less tetchy, “you would think that chronologically there might be some connection between mature years and creative vigour, but actually, there is none whatsoever. I think that as we get older, the brain gets better and better, especially if you use it in the right way.”

Simon is now slowly easing himself into the conversation, his natural introspection and self-inquisitiveness exploring each question. Three times married (Peggy Harper, 1969-1975; actor Carrie Fisher, 1983-1984; and singer Edie Brickell, 1992-present), he has long been viewed as a guarded, restless individual, as well as a systematic, unambiguous autobiographical songwriter unafraid to document tumult and composure.

Despite his wealth (he has one of the most valuable self-owned publishing catalogues in pop music) and what appears to have been an extremely rare personal infraction two years ago (Simon and Brickell were arrested on disorderly conduct charges, which were subsequently dropped), he maintains a low profile. Even as far back as 1980, when he dipped his toe in Hollywood with his first and only starring film role in One Trick Pony (which he also scripted), he told People magazine that “being a celebrity undermines the seriousness of your work”.

It is easy to forget that he started writing songs at the age of 13, initially for his ongoing partnership with school friend Art Garfunkel (as the teen harmony duo, Tom & Jerry), and thereafter as a vehicle for others. Come 1964, however, Paul and Art signed to Columbia Records, dropping Tom & Jerry in favour of their surnames. Simon will not answer, let alone entertain, questions about Simon & Garfunkel. This seems fair enough; the halcyon years comprised five albums between 1964-1970.

His highly successful solo work from the 1970s onwards more than doubles that figure – while records such as Graceland (1986), Rhythm of the Saints (1990) and Surprise (2006) continued his perfectionist working methods. Interestingly, taking stock of his legacy is something that doesn’t appeal to him. “I don’t think I have a very accurate take on it. Time takes care of that – the songs, that is. They live for as long as they live, and that’s the definition of the legacy – unless scholars decide to go in and start to analyse what was going on. That’s highly unlikely, however, so I spend no time thinking about legacy. It’s not relevant to my thinking about my work, and frankly, it’s not that interesting a thought to me.”

One would have presumed that such a scrupulous songwriter might take exception to his work being probed and critiqued, but Simon appears indifferent to it. “Most of the time I hear or read anything about my work I take exception to some portion of it, at least. There are some examinations that are insightful, and yes, there’s something to be gained from that. There are some that are insightful in a negative way, and by the time you get to a certain point in the reading of it you are perfectly willing to accept that.

“Most of it, however, is worthless, so you don’t pay any attention to it – in my mind, they don’t get it, they don’t get what I’m doing, so what’s the difference of someone’s opinion? My music will find its place in the culture or it won’t, and that’s really the only function it ever had.” Simon realises such judgement is harsh, however, so he quickly relents.

“Yes, in terms of my life, in an ego sense, it has had a big function. It’s also very fortunate that I chose a field that I loved and to have made a career out of it. But in terms of an overview of its value? I guess the only value judgement is whether people will still sing your songs in 50 or 100 years time. I could mention songs like El Condor Pasa, Sound of Silence and Bridge Over Troubled Waters and a few others of mine – I kinda agree that their value is indisputable in that they lasted about 50 years, so we’re almost halfway there!”

We are getting on so well, but another bristle is on the way when I bring up the topic of retirement. In late June, in an interview with The New York Times, Simon was quoted as saying (in context), “I am going to see what happens if I let go. Then I’m going to see, who am I?” Having just released an album so full of vitality, I ask if his retirement plans are true.

“Not quite, not quite,” is Simon’s clipped reply. “What I said was I was thinking about what I would do if I didn’t take my creative impulses and channel them into, for me, a typical form of creativity – a song, or music. You know, if I didn’t do that, what would happen? What I actually meant was exactly what I said: I’m thinking about it, I’m wondering about it. I posed the question not knowing what the answer might be.”

I suggest that, irrespective of whatever decision he makes, his love of words will never retreat. Simon asks if I’ve ever met Paul Muldoon, the New York-based Irish poet (and a good friend of his). It says much about Simon’s art as a lyric writer that he was also on friendly terms with Seamus Heaney.

“I talk to Paul and see him fairly regularly – he was saying this year is the third anniversary of the passing of Seamus. I know I don’t need to tell people in Ireland about Seamus – he was an extraordinary man and a great, great poet. He was also such a pleasure to be with, and I’m delighted to have known him. Finding the poets that are great and who touch your life is like finding a goldmine that you have forever. Most people never find that poet – they give up because most of the stuff they read doesn’t really move them. I go back to certain poets who I read very regularly, and Seamus Heaney is right at the top of that list.”

We are running out of time, and Simon is on a tight schedule. In conclusion, I mention his own lyric writing skills, of how many of his songs are regarded as pop classics, and remind him again of the vitality and vibrancy of his new album. I ask does he continue to be energised by his work; with all signs of retirement (semi or otherwise) gone, he audibly brightens up.

“I almost never listen back to my old work,” he begins elusively, “but the other day I was showing a song to a musician that I was thinking of working with, and I came to the song You’re the One – which is from the album of the same name – and it could have come from Stranger to Stranger. There was the same level of surprise and mystery.

“So, yes, the new album has a lot of energy, although it didn’t begin that way. It began very slowly – they usually do – but then focus becomes apparent, and with that you get energised. Maybe we can’t do the all-night sessions anymore, but the thinking is still crackling. When you add that to the years of experience – and if your accumulated editing ability is still sharp – then that produces a certain advantage in making a record that is countered by the exuberance of youth.”

That has a natural sense of excitement, he says, “although maybe not so much today because everything seems so calculated and corporate. But as far as energy goes, yes, I think the new album has a high level of it.” Did that surprise him? “I wasn’t surprised.” This is said with a hint of exasperation, but it’s more polite than unfriendly. “It’s like I said, the mind improves as you get older.”

n  Paul Simon performs at Dublin’s 3Arena, November 21st. His latest album, Stranger to Stranger, is out through Virgin/EMI