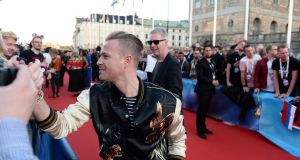 Former Westlifer Nicky Byrne meets fans while on the red carpet ahead of the official opening ceremony of the 61st annual Eurovision Song Contest, at the Euroclub, Stockholm, Sweden, May 8th, 2016. Byrne will perform the Irish entry in the contest, the grand final of which will take place this Saturday, May 14th. Photograph: Pontus Lundahl/EPA

The Eurovision Song Contest - the territory of which spans from Europe’s icy Scandinavian north to its sweltering antipodean south (Australia) - is back. It starts with a semi-final tonight. Then there’s another on Thursday featuring our own Nicky Byrne.

The Eurovision is an endearingly odd phenomenon. At its silliest, it’s a pageant of electropop, nationalistic cosplay and Eurobabble (exemplified by Sweden’s 1984 winner, Diggey Loo Diggi Ley).

At its best, says Karen Fricker, onetime Eurovision reporter for this paper, it’s a joyfully tuneful vehicle “for working out questions of national identity”.

I like the Eurovision (listen to my attempt to write a Eurovision song here) and am on Tuesday flying to Stockholm, Sweden, where’s it all happening this year.

This year, there’ll be more to marvel at. Ivan from Belarus has promised to perform naked with wolves (Lord knows what elements of national identity are being worked out here) and Nicky Byrne tells me he’s seen “someone on a trampoline”.

In 1956, the European Broadcasting Union (EBU) developed the ability to share a signal across the Continent - so they invented a song contest. “It was established to test technology,” says Fricker, “but it quickly became associated with noble ideals like European belonging.”

European belonging is a lyrical obsession, and it generously extends to include both Israel and Australia (to enter, a nation needs to join the EBU but not necessarily be European). The EBU embraces politics to an extent.

On Monday, Fricker, an assistant professor of theatre at Brock University, ran an EBU conference about the Eurovision and European identity. And this year the contest’s own theme, “Come Together”, explicitly references the refugee crisis (there will be an interval performance on this theme).

Lyrically, the EBU tolerates both exclamations of national pride (“I love Belarus!” proclaimed a 2011 song from autocratic Belarus) and idealistic pleas for peace and unity.

But when darker relationships between nations are evoked, they get nervous. Explicitly political songs are forbidden - a Georgian song referencing Putin was disqualified in 2009.

Political themes still slip through. The Greek song is a nifty rabble-rousing ethno-rap number called “Utopian Land”, which could have been written by Syriza (“Fight with us for a Utopian Land”).

The Ukrainian song, “1944”, recalls the Russian deportation of the Tatars, sung by a woman of Tatar descent. To the EBU, this isn’t a reference to current events but a historical song, like Abba’s “Waterloo”. “When strangers are coming,” sings Eurovision veteran Jamala, “They come to your house. They kill you all.”

Elsewhere, political subtexts are harder to find, though Bulgaria’s “If Love was a Crime” may be highlighting future government policy, while Denmark’s “Soldiers of Love” sung by hunky boyband Lighthouse X could be some sort of recruitment drive.

Ireland’s bright and sunny entry, “Sunlight”, seems apolitical, until you consider that Byrne is to be joined in Stockholm by father-in-law Bertie Ahern. Could stepping into the Sunlight be a reference to a resurgent Fianna Fáil?

Russian act Sergey Lazarev’s “You’re the Only One”, this year’s favourite (followed closely by Ukraine and France), features no obvious political references, but Sergey could be booed anyway.

In recent years Russian acts have often been booed during voting as a consequence of their government’s stance on Ukraine and LGBT rights.

Booing is discouraged by the EBU. They also dislike contentious flags. This year they banned flags from non-competing countries and caused controversy by seeming to equate the Welsh flag with that of Islamic State.

Voting patterns can also be political. Televoting began in 1998, but juries were reintroduced in 2009 to reduce the effect of bloc-voting. Now there’s a mix of both, which creates interesting anomalies.

Last year Italy won the televote, but Sweden won overall. This year, they plan to present the jury vote and the audience vote separately in order to keep an element of suspense until the show ends.

“Armenia and Azerbaijan are at war and never vote for each other. [But] the former Yugoslavia countries were at war back in the 1990s and give each other high votes. Ukraine and Russia are involved in a proxy war and still exchange votes.”

The perennial complaint is that bloc-voting in the East stops Western countries winning - as is apparently their God-given right.

Kavanagh disputes this. The worst country for giving Ireland votes, he says, is actually Italy (“What did we do to Italy?”).

Complaints about bloc-voting peaked, he says, “when Western countries were sending rubbish and the only people making an effort were from the East. They did a lot for the contest. They forced Western Europeans to get their act together.”

Ireland hasn’t quite got its act together yet. We’ve struggled with how to select acts - cycling through mockery (sending Dustin in 2008), mentorship programmes, public votes and, this year, the dictatorial selection of an established performer, Byrne, by shadowy figures in RTÉE.

Perhaps not enough of us take Eurovision seriously. “In Sweden they have Melodifestivalen [to select their song],” says Nicky Byrne. “It’s like their X Factor - 82 per cent of the public watch it.

“A radio presenter here told me that when it’s on, the streets are empty. We can’t compete with that. That’s not how things were in Ireland even when we were winning.”

The countries most likely to give Ireland points (according to Adrian Kavanagh’s analysis of voting patterns since 1998):

The countries least likely countries to give Ireland points:

Italy, Czech Republic, Georgia (though they did give points in Junior Eurovision, Kavanagh points out), France, Moldova