The secrets of Prince’s original recording, unheard until today 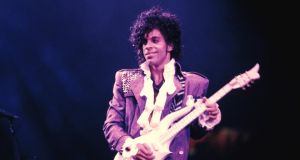 Nothing Compares 2 Me: unless Prince asked them “he didn’t like anyone covering his songs”. Photograph: Richard Aaron/Redferns/Getty

Thirty four years ago, when Paul “St Paul” Peterson was the singer in The Family, a band Prince had assembled, he was sitting in his mother’s house in Minneapolis when he received a tape containing Prince’s recording of a song he wanted Peterson to learn for the album he was producing for the group.

“I was told to learn Prince’s inflections, his emotions and the melody line,” the singer says, describing how capturing the song’s themes of loss and abandonment meant he had to go “deep”. “So I thought about a girl called Julie, who broke my heart in high school.”

It was Nothing Compares 2 U. Prince’s recording went unreleased, The Family’s version became a barely heard album track, but Sinéad O’Connor’s smash 1990 reimagining let the world hear what is now acknowledged as one of Prince’s greatest songs.

Today, as Prince’s more electronic, rockier original is finally made public, Peterson – who has been married to Julie for 28 years – is back in his mother’s house. He has just listened to the recording he last heard in 1984 and admits: “I’m freaking out here, man.”

On a creative roll

Prince’s sound engineer, Susan Rogers, goes back further: she witnessed Nothing Compares 2 U’s birth. In the summer of 1984 Prince was working in the Flying Cloud Drive Warehouse – his huge rehearsal space before creating Paisley Park – and was on “a creative roll, cranking out a song a day”.

Prince: The original Nothing Compares 2 U

Sinéad O'Connor: Nothing Compares 2 U

He was also in a relationship with The Family’s Susannah Melvoin (who can be heard on backing vocals, alongside St Paul, on Prince’s Nothing Compares 2 U). “It was clear that she was becoming more important than the other girls he’d dated,” Rogers says. “Simultaneously, his young housekeeper, Sandy Scipioni, had to leave suddenly to be with her family because her father died of a heart attack. Sandy ran Prince’s life. He kept asking, ‘When’s Sandy coming back?’ ”

One day he went into a room with a notebook and, within an hour, emerged with the lyrics to Nothing Compares 2 U. Rogers, who witnessed many such bursts of creativity, says, “The song came out like a sneeze.”

As usual, she rolled the tapes as Prince laid down instrument after instrument, mixing and overdubbing in the same session. (Eric Leeds overdubbed the saxophone part three days later.) Rogers felt the finished song was “exceptional, in his top 10”, but has a compelling theory about why Prince didn’t release the song under his own name. (A live duet with Rosie Gaines appeared years later, on the 1993 compilation The Hits/The B-Sides.)

“He wasn’t living with anyone, but he was a young man writing about domesticity. The line ‘all the flowers that you planted in my back yard went out and died’ . . . it would have been Sandy who planted those flowers. ‘And I know that living with me baby is sometimes hard, but I’m willing to give it another try . . .’ There was no romantic relationship with Sandy. It’s not a pained ‘Help me, baby’ track. It’s ‘You’re gone and I miss you,’ which is probably why he felt comfortable giving the song away to The Family. He released his material based on what he wanted us to know about him – and, wonderful as it is, he didn’t want it to represent him.”

Rogers argues that in setting up his own label, Paisley Park, Prince had “bitten off more than he could chew” and was too busy running his own career to properly promote The Family, who he had signed. So when Peterson heard O’Connor’s version – and saw the famous tearful video on MTV – he first thought, That should have been me. Later, however, he loved it, and told Prince he was pleased Prince would earn lots of money from her recording. “He went: ‘Money?! It’s not about money!’ He told me he didn’t like it [O’Connor’s version]. Unless he asked them he didn’t like anyone covering his songs.”

“Prince was the most courageous person I ever met,” Rogers explains. “He realised he had to socially handicap himself to be the artist he wanted to be, and that to do that without being an asshole he had to be a complete enigma. My gut feeling is that everything he recorded should be released, so that people can understand where he came from and keep his memory alive.” – Guardian

Nothing Compares 2 U is available as a stream and digital single. A 7in picture disc is exclusively available via the Prince official store. A black vinyl 7in is out on 25 May. The Family now tour and record as fDeluxe, and appear at the annual Paisley Park celebration in Minneapolis, which runs until Sunday, April 22nd