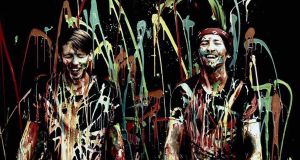 Jimmy Rainsford and Ryan Hennessy from Picture This

Tuath - Ní Miste Leis An Cruinne
Donegal is an unlikely attractor of experimental noise music thanks to the Distorted Perspectives festival in Letterkenny and a population of musicians. Tuath, from the county, embrace those outsider tags with a new forthcoming EP of “heavy psychedelia and saxophone-inflected space rock”. Ní Miste Leis An Cruinne is seven minutes of heavenly white ambient noise that wears its wildness proud.

AboveDat - Dance On (feat. Jesse Boykins III)
Cork radio and DJ Stevie G and Young Wonder producer Ian Ring are AboveDat and together, they're exploring the dancier side of their love of hip-hop, soul and electronic music. Second single Dance On ropes in the silky Pharrell-esque voice of Jesse Boykins III for a bopping dance-pop number.

Fangclub - Loner
Nirvana appear to be a chief influencer of Dublin trio Fangclub (songwriter/guitarist Steven King, bassist Kevin Keane and drummer Dara Coleman). They have followed up the ass-kicking Bullethead with the more sullen and slow single Loner.

Hvmmingbyrd - If Love Was Enough
Another band who have switched up their sound to the point that's its practically unrecognisable to the folk sound they had before. Now newly formed as a duo, Suzette Das and Deborah Byrne’s music keeps the harmonic strand that Hvmmingbyrd had before, but imbues it with a softer and more modern sensual pop sound.

RELEASE OF THE WEEK
Nocturnes - The Soft Animal
Pearse McGloughlin recently became a father and, like many before him, the songwriter began to re-evaluate and reflect on the place of himself and his family in the world and our connections with spiritual and animal nature. The result is The Soft Animal, McGloughlin's fourth album, a meditative collection of “refined atmospherics that draws from the things that matter most." A guest vocal from Adrian Crowley along with musicianship from Enda Roche and Christophe Capewell on violins deepens that resolve and meaning on an album that feels open to possibilities and interpretations.

NEW ARTIST OF THE WEEK
Picture This
One of those bands who seemingly appear out of nowhere to make anyone who wasn't paying attention older than they are, Picture This are the Athy 20 year-olds Jimmy Rainsford and Ryan Hennessy, who only started making music together last October. Their knack for radio-friendly pop music in the style of The Coronas has propelled them to three sold out Dublin Olympia Theatre shows in November, half-a-million Youtube videos and a top-10 single. They also sold out their first gig in Dublin's Academy six weeks in advance and run a Facebook video series called Traffic Jam where they're joined by well-known faces Gavin James, Ryan Sheridan and Aslan’s Christy Dignam in the car, Carpool Karaoke-style. These are savvy kids and now, you can legitimately feel old.

VIDEO OF THE WEEK
Hilary Woods - Sabbath
Directed by Sandy Kennedy
Suiting the orchestral-minded “sonic nordic noir” from the singer-songwriter's recent Heartbox EP, Kennedy's visual for Sabbath moves between sepia and monochrome palettes and a suggestion of turmoil in the mostly serene soundscape.