New artist of the week: boygenius 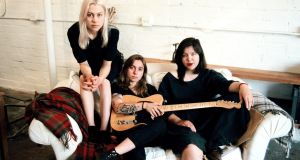 What: Three of the best new female singer-songwriters get it together

Why: If you made a list of the best new female artists from North America in the last few years, you could put on a sizeable bet that Julien Baker, Phoebe Bridgers and Lucy Dacus would be on it.

Baker is a Memphis native who accesses a maturity beyond her 22 years. Last year’s Turn on the Lights was her second album of her career and marked her as an alt.singer-songwriter to watch. Nashville’s Dacus also just released a second album, Historian, to much critical acclaim across the pond. Word of her self-confessional indie folk has spread to these shores as she played Electric Picnic on Friday night. Meanwhile, Bridgers is an LA artist whose work delves into folk and rock music. She has a debut album under her belt and the kind of voice that cuts through the bull.

The trio share the ability to connect to audiences with autobiographical tales and it hasn’t been uncommon for them to share bills on stages.

So it’s no big surprise that they have fashioned a six-track EP together to be released in November on Matador Records. The songs were written backstage at those gigs.

Of the three songs shared so far, Me & My Dog is the highlight, drawing on the strengths of each, with Bridgers taking lead on the song, joined by Baker and Dacus on the chorus for support. It’s a song that achingly moves from young love (“we got no sleep/ Cause we were kissing) to heartbreak (“I wanna hear one song without thinking of you/ I wish I was on a spaceship/ Just me and my dog and an impossible view”) and does so with tones of country, melodic folk, indie and singer-songwriter strands. Boygenius is the best of three worlds.

Empress Of – When I’m With Him
Empress Of - When Loreley Rodriguez’s debut album Of Me was filled with individualistic, self-produced pop music that explored emotional themes. For the follow-up, Us, due October 17th, 70 per cent of the record is her work while Dev Hynes, Pional and DJDS were drafted in to finish it. Lead single When I’m with Him embraces a more breezy pop sensibility than her previous work, but doesn’t sacrifice any of Rodriguez’s core charm.

Jade Bird – Uh Huh
A buzzing young English singer-songwriter drawing from vintage rock’n’roll and powerpop sounds, Jade Bird retains her auteur-like streak on a song that sounds like Ireland’s own Hot Sprockets with a female vocalist. Bird has honed her craft supporting First Aid Kit and there’s certainly a twang of country at play on this breakthrough. Catch her at Whelan’s in Dublin on November 30th.