Maria Callas: ‘Pleasant, amenable, docile, gentle – but, if crossed, like a viper’

‘La Divina’, one of the greatest singers of her time, returns in a new version of her studio recordings 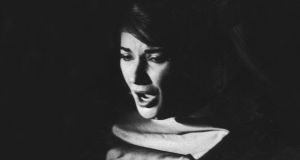 There’s definitely something about Maria. But that shouldn’t be a mystery. She was one of the greatest singers of her time, and led a life that fostered sensationalist coverage.

Maria Anna Sophia Cecilia Kalogeropoulou was born in Manhattan in 1923, but she returned to her Greek roots at 14 and was vocally and musically developed enough to sing her first Tosca before she was out of her teens.

The great Italian opera conductor Tullio Serafin took her under his wing, and she was already making waves by the end of the 1940s. An early review in Gramophone magazine noted that “she sings in the grand manner, with an unusually beautiful timbre, and true pathos at her command, while her coloratura is quite excellent”. The distinctive, smoky character of her voice has always been divisive. Stars collect detractors as well as fans. But within a few years she had become a household name, rarely out of the headlines, and Italian postal workers knew where mail addressed simply to “La Divina” was to be delivered.

Cancellations and refusals to complete performances were among the issues that fuelled coverage. Four successive editions of this newspaper in January 1958 carried the headlines “Police break up crowds in opera row,” “US hostess involved in Rome opera dispute,” “Opera singer to try again?” and “Soprano to sue opera company”.

As well as conquering the international opera stage, she had transformed herself from the appearance of a candidate for the Biggest Loser. She shed nearly five stone to turn herself into a glamorous, instantly recognisable fashion icon. In the late 1950s she began an affair with Greek shipping magnate Aristotle Onassis that would last until Onassis spurned her to marry Jacqueline Kennedy, widow of US president John F Kennedy.

The attractions of high society saw her neglect her art, and her voice suffered. She withdrew from the opera stage in the 1960s, and later went on to make a splash with masterclasses that were filmed at the Juilliard School in New York. She appeared in an acting role in Pasolini’s film Medea, and in the early 1970s even attempted a comeback concert tour. It got a poor reception. She was living in seclusion, some say in neglect, in Paris at the time of her death in 1977, aged 53.

Her recordings were a mainstay of EMI’s classical division for decades, and, after Warner acquired EMI last year, the new owner has chosen to reissue the 69 CDs worth of music she recorded in studio in a newly remastered edition.

Robert Gooch is a balance engineer who worked on two of her opera recordings. He remembers her as being “very amenable, very pleasant. None of the tantrums that she’s associated with. There’s an aria from Barber of Seville, and in it she sings, ‘I’m pleasant, I’m amenable, I’m docile, I’m gentle, but, if I’m crossed, I’m like a viper.’ I think that sums her up.”

Gooch had no personal contact with her when he worked on Rossini’s Barber of Seville in London in 1957. He was in a separate room with the team recording the sessions in stereo, then an experimental technology. The main recording was actually in mono.

“The second opera was Norma in La Scala. That was my first real contact with her.” The Milan sessions were not hassle-free. “There were two setbacks. When we arrived, Deutsche Grammophon were in the middle of recording Un Ballo in Maschera. La Scala had double-booked. And then she announced that she wasn’t going to sing in the first session. She had some affliction.

“But she said, ‘Don’t worry. Tomorrow will be fine.’ She turned up the next day and sang all the principal arias and duets in the afternoon and evening sessions. Apparently, to remedy her affliction, she had consumed a glass of castor oil. So it wasn’t a matter of Casta Diva [the great aria from Norma] but castor diva. But for the next two days we didn’t see anything of her, because of the effects.”

Gooch’s favourites among her recordings are the sleepwalking scene from Macbeth (“you can hear every colour she could produce, down to the extraordinary low register, this chest voice, which was remarkable”), Depuis le Jour from Charpentier’s Louise (“a lyric aria, really superb”), and a filmed excerpt from Tosca with Tito Gobbi (it “shows her as an actress, and the technique and musicianship are superb”).

The new remastering sessions went back to the original sources, with much of the work documented in some detail in a 130-page, hard-back book that comes with the set, along with archival illustrations and photographs. The meat, of course, is the recordings themselves, now sounding that bit sharper and clearer, from the 25 minutes of Wagner and Bellini she recorded on 78s in 1949 to the 12 minutes of Verdi in her last session in 1969.

Callas was a singing actor of rare insight as well as an insightful musician. The voice was not an end in itself, but a means to a musically expressive and emotional effect. Her special miracle was in the way she balanced the separate demands, or, rather, created a kind of vocal multiplex that always rang true, even if the actual sounds could be unorthodox. Warner’s handsomely presented package brings that home more vividly than ever before.

Corey Taylor: After 20 years in Slipknot we are all beat up