Slane Castle owner says he will be ‘there in spirit’ as 80,000 fans descend on Saturday 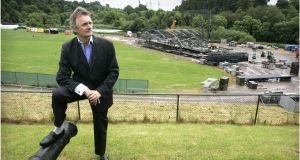 It has been confirmed that for the first time ever Lord Henry Mountcharles will miss a Slane concert.

The Slane Castle owner will be in hospital on the order of his doctors after developing a chest infection last week.

Through a spokesperson he said: “I am obviously extremely disappointed that I can’t be there and my wish is for all of the fans to enjoy the day.

“I will be there in spirit.”

On Saturday 80,000 fans will see Guns ‘N’ Roses headline at the natural amphitheatre that rests beside the Boyne river and Slane Castle.

It will be their second time appearing there; the last time was 25 years ago when at one point Lord Mountcharles feared things could get out of hand as the crowd got restless waiting for them to perform.

That will not be a factor this year with the advice being that they will go on stage, possibly by 7pm, to ensure they get to play their full set.

Gates will open at 2pm, with first support act Otherkin kicking off the show at 3.30pm followed by Mark Lanegan and Royal Blood.

The current heatwave which has seen the country bask in the hottest temperatures of the year this week will begin to ease slightly on Saturday.

Temperatures are due to drop to between 15 and 20 degrees with heavy, thundery rain for most of the morning.

Saturday night will be generally dry with clear spells and temperatures falling to between 7 and 10 degrees.

There will be over 400 gardaí on duty on the day, as well as an additional 1,200 stewards and security workers.

There will also be a large team of doctors and medical workers, including an on-site hospital along with five first aid posts.

Marathon Coach will also be running a return service from Custom House Quay every half hour from 11am to 5pm. Tickets are €30 .

If you’re planning on driving, allow a minimum of two hours additional travel time. On Saturday, Slane village will be completely closed and a comprehensive traffic plan will be in operation.

Follow the signs and garda directions to the parking areas. All car parks are operated independently of MCD and a parking charge will apply.