James Vincent McMorrow makes a welcome return home, but no one is overshadowing Massive Attack 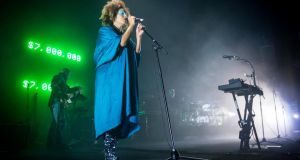 This Swedish folk duo are almost unlikely stars, but there is something effortlessly charming about their simple guitar and keys combo and note-perfect harmonies. It’s a good afternoon slot on the Main Stage for a sunny Sunday, with Longitude’s audience coming on site with less hectic energy than Saturday’s crowd, and are thus greeted kindly by First Aid Kit’s wholesome sound. A cover of Simon and Garfunkel’s America goes down beautifully, as does another borrowed tune, Bob Dylan’s One More Cup OF Coffee. Gentle and blessed out stuff all in all. Una Mullally

On paper, Say Lou Lou are a record company’s dream: twin sisters, hailing from Sweden and Australia, with rockstar parents. Live, it’s a fairly blissful dream-pop affair too, with Miranda and Elektra Kilbey leading their band through a silky set of sweet pop, with fine harmonies and a nice line in hooky, pop choruses. Sure, the confection might be too sweet for some tastes, and occasionally it drifts into Eurovision territory, but this is radio-friendly fare played with class on a Sunday afternoon when most people are ill-equipped for anything more challenging.

It’s the Californian’s first time playing in Ireland, although surely there will be more gigs to come once her debut album is released in September. Jillian Banks cuts a striking figure on the Main Stage, head to toe in black, and slowly unfolding her minimal, downtempo electronic ballads. The sound levels could be a little beefier, but Goddess and Waiting Game are both excellent. The tone of Banks’ music might seem a little emotionally distant, but she herself is anything but, at one stage threatening to cry, declaring that it’s the perfect show to end her current tour on, and throwing her hands in the air while a band member takes a photo of her as the set ends. UM

Rudimental attack the Main Stage in large numbers; three vocalists, a brass section, drums, keys, keytars, guitars and bass, and more. It’s a shot to the heart after a line up of sedate and thoughtful acts up until their slot. The energy works instantly, and the next hour of tight, fun, uplifting party music is a highlight of the day. Free and Feel The Love are essentially quite cheesy but perfect in context, and their stand out tune, Waiting All Night, goes off brilliantly, with vocalist Anne-Marie Nicholson owning the stage. Fun, musically deft, and with the tunes to boot. UM

It’s probably fair to say that Conor Oberst has been to hell and back in the last few months, after being falsely accused of rape in December 2013; the accusation was recanted just last month. So you can forgive him for seeming a little angry, or a touch unsettled. But then again, Oberst has always seemed that way; his songs run on the fuel of his discontent, powered by the rattle and roll of his lyrics. Bedecked in black with a wide brim hat, he cuts a casually furious figure, like the ghost of singers from rock and roll’s past - and it’s quite something to behold. With LA folk rockers Dawes as his backing band, and playing their second set of the day, it’s an old fashioned, world-weary set, with whip-tight playing and all the hallmarks of a band long on the road. Hit the Switch is a shunting, simmering joy; Soul Singer in a Session Band is a raucous, demi-riot. And Governor’s Ball seems to almost mock the festival crowd – Oberst sardonically says that because the crowd are at a festival, they’ll get the song more, “and you can Twitter the shit out of it with each other, and really believe in this moment”. The highlight, though, is probably the devil may care There’s Nothing that the Road Cannot Heal. Anger and bitterness aside, this is a terrifically executed set with plenty of passion to burn. LM

McMorrow is almost a different musician now to the one who was pigeonholed before as a beardy dude with an acoustic guitar. The subtleties of Post Tropical’s hidden corners ebb and flow in a live context, with the simple accompanying instrumentation demonstrating the genius of these songs’ constructions. Red Dust is beautiful and Cavalier simply swoons. This music does work better in a covered venue, though, and some of the complexities are lost in the field’s air. We Don’t Eat remains a stunning song, and there are a few other cuts taken from Early In The Morning, but it’s the new tropical chapter that shines through. UM

And so we reach the final furlong. The big cajones. The headline act. The Massive Attack. Would you bet on anyone else being able to upstage them as the finest act of the weekend? I pity the fool.

The full-scale assault of Massive Attack live never ceases to shock and awe. From the first, huge beats, which roll out like long-promised thunder, while a blur of brands and logos spin furiously on huge LED screens, this is a show of another level. A menacing Risingson sets an early bar; Martina Topley Bird leads a razor sharp Paradise Circus and a smoothly reworked Psyche, wound down and made more subtle. And then the band step it up a gear.

While Robert Del Naja directs operations, Grant Marshall rolls on and off stage. Horace Andy steps up for Girl I Love You, while binary code blips on the screen. It builds pace before streaming furiously in blood orange as the band churn the song up into a maelstrom of power. Angel is whipped into a white hot rage, Andy’s voice trembling with menace and intent. Teardrop is lent more muscle and groove, and then Deborah Miller almost steals the show with an astonishing, extended Safe From Harm.

While Inertia Creeps unfurls its coils, headlines from Irish newspapers blip on to screen, a steady diet of celebrity guff and political sideshows, sliced through by statistics from Gaza. It’s rare to see a band these days with a political message. It’s rarer still to see it musically unleashed with the cold, calculated fury of an army on the march. Unfinished Sympathy caps an overwhelming experience, one of many glittering highlights in a show furious with intent – hell, even the band look pleased with their work. LM