Life is a Picnic

On its 10th anniversary, Electric Picnic turned on, tuned in, and sold out. ‘The Irish Times’ went down to the woods to get a big surprise. Here are the best bits … 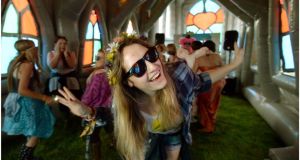 Laura Behan from Artane in Dublin on the first day of the Electric Picnic. Photograph: Brenda Fitzsimons

When you look at Stradbally on Google Earth there are patches of faded grass where you can make out the outlines of trails and tents and stages. This place is sacred to my people (men and women in their late thirties who remember cassettes).

Here, each year, we commune with nature by draping electrical cables through trees, grinding plastic beer mugs into the ground under our wellied feet, boring young people about Electric Picnics in times gone by and twerking (just me?) to an eclectic mix of guitar music, electronica and “culture”. Internet archaeologists say there have been such settlements at Stradbally since ancient times (back as far as 2004), a “boutique” civilisation dedicated to gourmet fast food (pies and noodles and such), heavily amplified music, public folk art (there are literal ‘wicker men’, but I don’t see any visiting policemen from the mainland being burned in them) and fashionably mulleted children being wheeled around in wheelbarrows.

The denizens of this lost idyll – well, lost as of late last night, when this year’s picnic drew to a close – wear uniforms of a sort. Some don face paint and wellies and jean shorts and put flowers in their hair (actually mass produced fabric “floral headbands”). Others opt for fancier dress. I see pirates, Sgt Pepper uniforms, a man with mustachios and a fez, a fellow in a onesie (being twerked on) and a woman dressed as Bjork. Actually that was Bjork.

Bjork is just one of a pantheon of musical stars to light up this year’s already sunny Picnic. Also present are David Byrne, The Wu Tang Clan, Warpaint, Franz Ferdinand, Billy Bragg, Robert Plant and former education minister Mary O’Rourke (on Friday night she does an EDM heavy DJ set… sorry, I’m now being told that was Fatboy Slim). The latter fits in surprisingly well. Backstage at MindField, O’Rourke, who’s chairing the Parliament event in the Mindfield area, is approached by a sixties survivor who says: “I’d shake your hand, but I have a joint in it.”

“Well you look fine apart from that,” she says, out rock-n’rolling him.

It’s the tenth anniversary of Electric Picnic, so on Friday night Fatboy Slim takes time out from raising his arms in a Christ-like gesture (his signature move) to cut a 10 tier cake. This is followed by a spectacular fireworks display that made people involuntarily gasp “oooh” while wondering what estranged founder John Reynolds thinks of it all (he’s currently in legal dispute with Festival Republic).

This year’s festival sold out (there are 35,000 people here). But there seems to be a strangely hollowed-out age profile. There are the usual late 30 and 40-somethings (the look: too tight band tee shirts, craft beer and ennui) There’s an influx of slightly more deranged looking Oxygen-deprived younger 20-somethings (the look: no shirts whatsoever, binge drinking in the campsite, twerking to undiminished dreams). And there are plenty sullen-looking toddlers in hipster ear muffs riding wheelbarrows like chariots. But this year there seem to be fewer people between the age of 25 and 35.

Luckily everyone across the age divide seems to be getting on okay. And why wouldn’t they? I’m a bit ‘tired’ but it’s clear to me that the Electric Picnic is a template for a whole new society. It’s a new beginning away from the ashes of the old world (Portlaoise, Dublin, Europe etc). Here we have everything we need to survive: Music. Art. Spoken word performances. Massage.

Plastic beer cups. A convoy of fast food vans. Mary O’Rourke, customised bicycles. Men on stilts. In the Green Craft Village there’s even a blacksmith. The only thing missing as far as I can see is heavy industry, but I didn’t see all of the Body & Soul section so there might have been a widget factory in there somewhere. So what’s my point? Brothers and sisters we can begin again in Stradbally. But first some Solpadine.